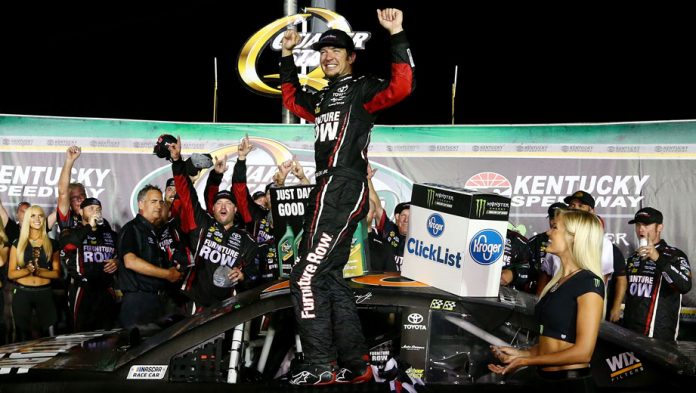 Martin Truex Jr. won all three stages in Kentucky to dominate the field.  He leads in stage points and he has swept 2 stage wins four times this season in the Monster Energy NASCAR Cup Series.

However, the Quaker State 400 victory did not come easily with just over a lap to go Truex held a more than 15 second lead over Kyle Busch with only eight lead cars remaining on the lead lap.  Just before Truex could take the white flag to signal the final lap, the engine blew in Kurt Busch’s Ford leaking oil on the track.  Under the yellow caution flag Truex Furniture Row team made the decision to stay on the track and not take a pit stop for fresh tires.

This was a high risk decision, but on old rubber tires and with a good shove from Larson who was lined up behind Truex in the outside lane, he surged ahead past Kyle Busch through the first two corners and held the lead until a crash behind him in the pack at the end of the first overtime brought out the ninth yellow caution flag keeping Truex in the lead.

In the final restart Truex continued his dominance and won the race in championship fashion while completing a perfect night when he took the checkered flag for the victory.  The win was his third of the season, his first at Kentucky Speedway and the 10th of his career.  Therefore, Truex increased his Monster Energy Cup Series leading playoff point total and keeping himself in first place 12 points above Jimmie Johnson.

Truex led a race high 152 laps and was clearly the fastest race car on the track.  He remains just one point behind Kyle Larson in the championship standings.

There were a few wrecks during the race and the most notable took out Brad Keselowski, Clint Bowyer and Jimmie Johnson.  Keselowski’s No. 2 Ford got loose on the entry to Turn 3 going sideways before he hit the wall and collected Bowyer’s No. 14 Ford.  Johnson who was running hard had to react quickly and just clipped Keselowski with his right front.  The collision busted something in the suspension and took Johnson into the fence.

The wreck ended their day and the two racing stars finished 38th and 39th respectively in a race where both drivers felt they had a chance at a top five finish.

Next week the Monster Energy Cup Series moves to New Hampshire Motor Speedway on Sunday July 16th at 3:00 pm eastern.  All the racing action can be followed on NBCSN, PRN and streaming on NBC Sports.