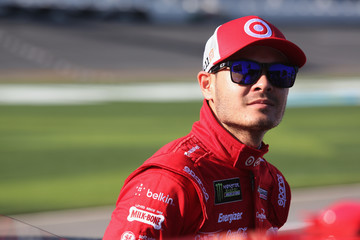 Kyle Larson who has finished runner up 4 previous races this season has finally put one in the books as the race victor.  Larson fended off a group of challengers in the final laps of the Auto Club 400 to capture his first victory of the season and his first in California.

Larson started on the pole and led a race high total of 110 laps took the lead on the final restart with two laps remaining in overtime passing other contenders for his second career victory.  The young 24 year old driver certainly is off to a great start on the season and appears to have a solid future.  Larson also won Stage 1, leading 43 of the first 60 laps.  While Martin Truex Jr. led all but five laps in Stage 2, to win the second stage.

The race started with immediate contact after the green flag impacting a handful of race cars and their drivers.  Denny Hamlin’s No. 11 Toyota was slow moving from the No. 2 position causing a backup in his inside lane that resulted in Brad Keselowski’s No. 2 Ford getting hit from behind by Ryan Newman’s No. 31 Chevrolet, and Kevin Harvick’s No. 4 Ford sustaining damage on the front bumper and grille.  However, all were able to continue and finish the race.

Meanwhile, Brad Keselowski finished second in the No. 2 Team Penske Ford with some aggressive racing even though he sustained early damage from the initial green flag incident.

Rounding out the top five were Clint Bowyer in his No. 14 Stewart-Haas Racing Ford took third place, Martin Truex Jr. finished fourth in his No. 78 Furniture Row Racing Toyota, and Joey Logano fifth in the No. 22 Team Penske Ford.

Larson who finished runner-up three straight weeks prior to the Auto Club 400 victory has his first trip to the winners circle since last years win in Michigan.  The 202 lap, 404 mile race was run in three stages, with caution flags at Lap 60 and Lap 120.  The final Stage was 82 laps, with the race going into overtime with Larson bringing home the victory.

The Monster Energy Series returns east from NASCAR’s western swing back to Martinsville Speedway for the STP 500 on Sunday April 2 at 2:00 PM eastern on FOX Sports, MRN, SiriusXM NASCAR Radio.