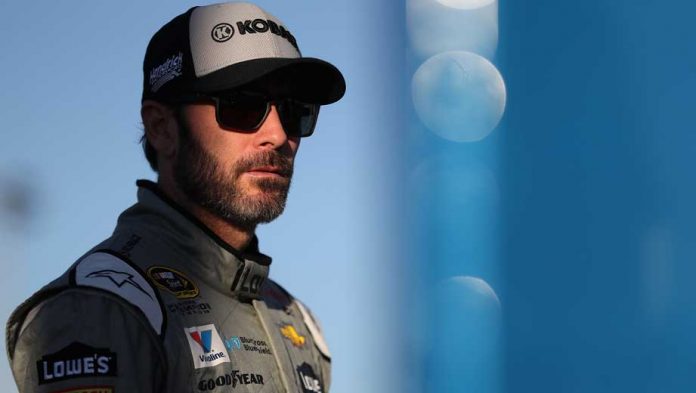 Jimmie Johnson in his No. 48 Hendrick Motorsports Chevrolet passed Joey Logano for the lead on Lap 318 of 334 to pull away from the pack for his first victory of the season in the O’Reilly Auto Parts 500 at the new revamped Texas Motor Speedway.  The win was Johnson’s seventh at the 1.5 mile race track and was his 81st of his illustrious NASCAR career.

This win was not an easy road for Johnson.  He spun in the first round of Friday’s knockout qualifying and flat spotted his tires.  When his team changed tires before the race they violated NASCAR’s rules regarding all the drivers start the race on their qualifying tires, this dropped him back to the rear at the start of the race.

However, Johnson kept crawling his way up to the leaders, and when the fifth caution flag was waved on Lap 121 for debris on the front stretch, he moved up to the top 10, and was fourth from the pits for the subsequent restart on Lap 127 putting him into a solid position to contend.

Meanwhile, Ryan Blaney led 148 of the first 172 laps to win both Stage 1 and Stage 2 including two playoff points, however, he finished 12th in the race after he slid through his pit box on the final stop on Lap 300 which cost him to lose valuable track position.

Kyle Larson finished second for the fourth time this season.  It was still a good day for the Credit One Bank Chevy team, as Larson picked up 47 points and has earned 6 playoff points for the season. Joey Logano finished third in his No. 22 Ford, he led for 38 laps and earned 36 points, Kevin Harvick in fourth in his No. 4 Ford, and Dale Earnhardt Jr in his No. 88 Chevy rounded off the top five.  Brad Keselowski the only two time winner this season on the race circuit finished sixth adding 40 points to his total.

Race fans will enjoy the weekend off as NASCAR celebrates the upcoming Easter holiday.  However, racing will return on Sunday April 23, 2017 for the Food City 500 at Bristol Motor Speedway.  The race will start at 2:00 PM eastern.  Fans can watch all the action on Fox or listen in on the PRN radio network.