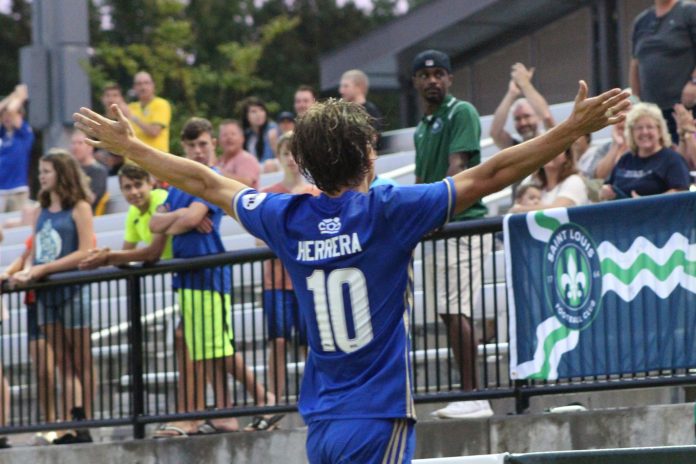 The USL Charlotte Independence put on a dominating performance Saturday night at their new home in the Matthews Sportsplex after a 90 minute delay due to inclement weather for the second week in a row.

The front line forwards of Jorge Herrera and Enzo Martinez were simply outstanding with Herrera getting his first professional hat trick scoring 3 goals while Martinez applied offensive pressure all night scoring a goal himself.  Bilal Duckett the aggressive Indy defenseman added a goal late in the second half to make this game a lopsided rout.

Saint Louis is not a bad soccer club, the Independence are on a roll and are firing on all cylinders winning their fifth straight game after a successful road trip.  The team now has a 8-3-4 record and are sitting in second place in the east trailing Charleston.

The scoring began only 14:00 minutes into the match when Jorge Herrera scored on a rebound in front of the net with a header for a 1-0 Independence lead.

At the 29:00 minute mark Herrera scored on another rebound in front of the goal from pressure applied by Enzo Martinez who was awarded the assist giving the Independence a 2-0 advantage for the home team.

The game went back and forth with Charlotte controlling the tempo of the game throughout the first half of play keeping the offensive pressure on the visitors while preventing Saint Louis from mounting any serious counter attack with the exception of three opportunities with shots near the Independence goal that sailed high and wide.

The Independence struck again at 39:00 minutes on the clock when Enzo Martinez scored his eight goal of the season giving the home team a commanding 3-0 lead with an assist from his midfielder brother Alex Martinez.

The first half ended after 45:00 plus 2:00 minutes played with Independence in the drivers seat ahead 3-0 with a lot of confidence in their performance.  The crowd of roughly 1700 hardy fans who stuck it out through the heavy rain and lightening display were very enthusiastic.  They appeared to be extremely appreciative of the style of play this team brings each and every time they perform in front of the home fans.  The fast pace and tempo of the game along with their aggressive play on the field certainly keeps your attention focused on the non-stop action.

In the second half Saint Louis came out of the locker room in desperation mode and tried to apply more offensive pressure on the Independence defense.  The visitors certainly picked up the tempo and sense of urgency.

At 57.00 minutes into the game Saint Louis scored their only goal by Octavio Guzman to cut the home clubs lead to 3-1 giving the visitors some hope for a comeback.  However, at 61:00 minutes Jorge Herrera scored on a penalty kick for his third goal of the game, thus the all illusive hat trick.

With a 4-1 Independence lead and Saint Louis frantically trying to attack they scored a goal at 74:00 minutes that was disallowed due to an offside.  Then there was  a turnover which lead to a breakaway for Independence who charged the visitors goal at 78:00 minutes and scored their fifth goal of the game when Bilal Duckett put the ball in the net on a header for the 5-1 lead deflating any comeback by Saint Louis.