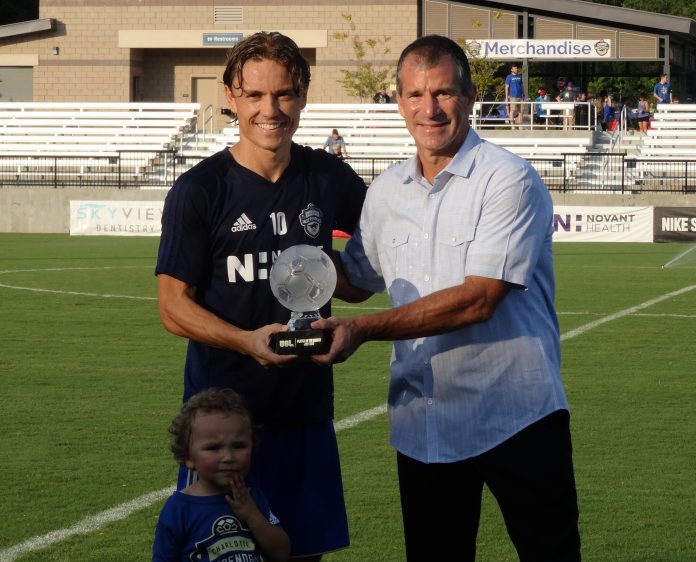 The USL Charlotte Independence Soccer Club disappointed the home fans with a 1-1 draw on Saturday night at the Matthews Sportsplex.

The Jacks still remain in first place in the USL Eastern Conference with a 12-4-8 record and 44 points.  However, Independence played the eight place team last night to a draw in a game where they dominated the time of possession.  They also took 21 shots with only 9 on target and one getting by the Orlando City goalkeeper Earl Edwards who was outstanding on several occasions under heavy pressure.

The home team had plenty of opportunities to obtain the win and gain 3 points to extend their lead over Charleston and Louisville.  Instead they had to settle for 1 point, the good news is the Jacks are still undefeated at the Sportsplex and remain on top in the east.

Early in the contest the home team gave away a penalty kick when Orlando City’s top scorer Hadji Barry rocketed his eight goal on the season giving his team a brief 1-0 lead.  Suddenly, the Jacks bounced back when David Estrada scored a goal 2 minutes later inside the box to tie the score at 1-1.  Unfortunately, this was all the scoring the home team would provide tonight on a beautiful evening for a game.

Orlando was clearly outplayed in the first half.  However, in the second half they came to play competitively and ended up taking 13 shots with 8 on target for the entire match.  Independence goalkeeper Cody Mizell was very sharp in the net for the home team making some tremendous saves.

Orlando City now has a record of 7-6-11, with 32 points and remains in eight place in the east.  Overall, it was a hard fought match between two teams who showed some true grit and at times the game became physical.  The visitors were issued three Yellow Cards Hadji Barry for not retreating, Zach Carroll and Paul Clowes both for a foul.

Independence played aggressively, kept pressure on their opponent, it just turned out to be one of those “what if” games that will happen during a course of a season.  If the Jacks continue to play with the same intensity the wins will come and we should play our first home playoff game at the friendly confines at the Sportsplex.

The next home game at the Sportsplex in Matthews will be on Saturday August 26th at 7:00 PM when Toronto FC II comes into town.