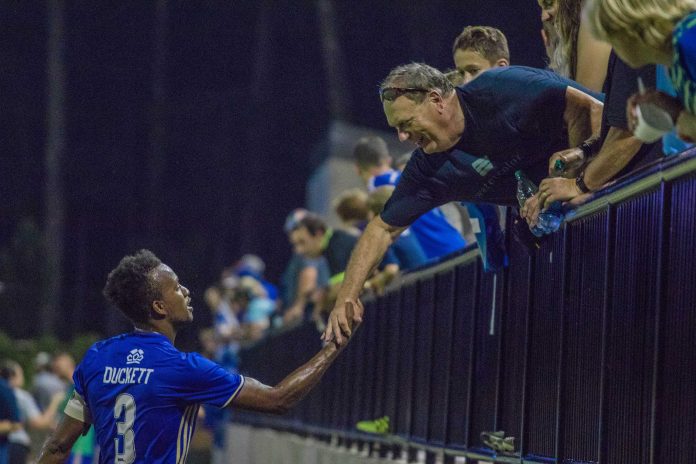 The Charlotte Independence tied the Richmond Kickers 0-0 on Wednesday night at the Matthews Sportsplex to remain in second place 3 points behind first place Charleston Battery in USL Eastern Conference competition.  The home team is currently unbeaten in their last 9 games.

The club returned from a recent road trip where they had a big win over the New York Red Bulls II and tied Harrisburg.  However, they had 7 days off and it showed in the first half especially during the first 18 minutes of action.  The team came out a little flat which is unusual for this group of players who normally pressure their opponent from the opening minute of a match.

Throughout the first half, Richmond dominated the action with more time being spent on their side of the field applying offensive pressure and ball control in their favor.  However, the Kickers were only able to mount two missed shots until Independence Forward Enzo Martinez took a shot on goal at 18 minutes.

Meanwhile, Forward Jorge Herrera had three free kick attempts and two corner kicks that were not able to penetrate the net for a goal during the contest.  In fact, the Independence took 16 shots forcing Richmond goalkeeper Matt Turner to have six saves in the game.  This is mainly due to the home team forcing the action throughout the entire second half.

The Independence entered the game with their number one goalkeeper Cody Mizell temporarily sidelined due to a right leg injury he suffered in Harrisburg last week.  The backup goalkeeper Kyle Renfro filled in with a very impressive performance and making the most of his opportunity.  “Coach Jeffries informed me that I was the man, and to just come out and enjoy it and have fun tonight,” said Renfro.

Head Coach Mike Jeffries after the game with his interview with reporters said, “We know  this time of year we want to aggressively push and get points.”  He also mentioned the time off really did not impact the team, they needed the time off to recoup from the road trip and playing a lot of games lately without a break in their schedule.  “Defensively, Richmond played a strong game inside the box,” Jeffries said.

The Independence will move on to play on the road this Saturday against the Bethlehem Steel who is a solid club in the eastern conference.  The home team will return to the Matthews Sportsplex on Saturday night August 5th at 7:00 pm vs. Louisville City FC.