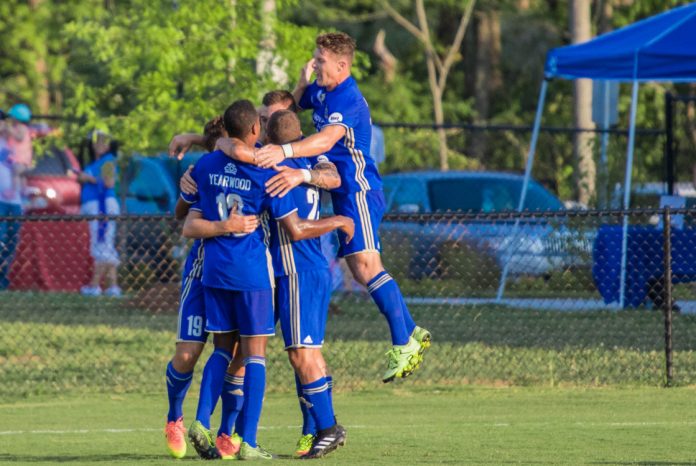 The Charlotte Independence played a home game at the Matthews Sportsplex on Saturday night against the third place Louisville City FC in a key USL Eastern Conference match-up for second place.  However, by the end of the evening the Independence found themselves in sole possession of first place with the 3-1 victory combined with the Charleston Battery being upset by Toronto 1-0.

Independence Forward Enzo Martinez had a night to remember achieving his first hat trick as a professional.  The 2016 USL MVP finalist scored his third goal at 80:00 minutes into the game.  However, it could prove to be costly because his celebration jumping into the stands with the fans the officials did not appreciate.  They issued Enzo with his second yellow card of the night.  He was sent off disqualified from the game and will face hopefully only a one game suspension from the league.

This was a real scrappy night at the Sportsplex.  Both teams played very physical and Louisville applied pressure throughout the match.  Independence took full advantage of three breakaways with Martinez cashing in on every opportunity with his outstanding skills and speed to score three goals.  The officials also handed out 9 yellow cards with 5 issued  to Independence and 4 to Louisville.

There were a lot of firsts for the Independence, the team is in first place in their conference for the first time in club history, they obtained their second hat trick of the season and a second sell out crowd was on hand 2,648 fans showed up Saturday night since the team moved to the Matthews Sportsplex.

There is a lot of excitement around the Sportsplex as the team is undefeated at home and has an 11 game unbeaten streak.  They have not lost a game since early June.  “It was a real good day for the Charlotte group, for sure,” said Independence Coach Jeffries after the  game.

Enzo Martinez said “It’s a good sign when you don’t play your best and are still able to attain the best result.”  He went on to compliment Louisville who has a very solid team and we fully expect to see them again down the road.

The Independence will hit the road for two games in Canada playing in Toronto and Ottawa.  They will return home to the Sportsplex on Wednesday August 16th at 7:00 PM to meet the Bethlehem Steel.  Also, they will play on Saturday August 19th at 7:00 PM against Orlando City in Matthews.

Let’s have a sell out crowd at both games to support the first place USL Charlotte Independence Soccer Club.