The Charlotte Independence played to a scoreless draw at the Matthews Sportsplex this past Saturday night when the visiting Indy Eleven came into town with their 3-1 record and stingy defense.

Both teams were unable to take away three points with a win, however, the draw does give the two clubs one point in a hard fought defensive battle.  Throughout the match the two teams struggled for possession without establishing an real advantage over their opponent.  The Jacks drew first blood at 17:00 minutes, defender Joel Johnson drilled a ball inside the box to find forward Jorge Herrera, who’s header went just wide of the outside post.  Then at the 40th minute the Jacks Cordell Cato took a shot hitting the top cross bar to frustrate the home team. 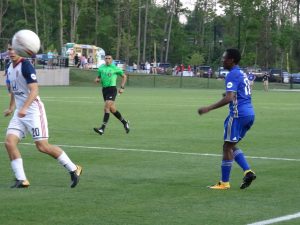 The second half turned out to be a similar script as the first half of this match.  At the 72nd minute Johnson passed the ball to Herrera who smacked a hard shot, but once again it slammed off the crossbar without going into the net against a beaten Indy Eleven goalkeeper.

Independence goalkeeper Brandon Miller a Charlotte native made his debut in goal and made two huge saves for the Jacks.  Miller did make the Wells Fargo save of the Game in the 63rd minute when he made an outstanding block of a shot by Soony Saad.

After the game, Independence Head Coach Mike Jeffries stated, “I thought it was a good, gritty performance, however, I’m disappointed to end a home game with a 0-0 draw, but I credit the guys for their effort and energy,” said Coach Jeffries. 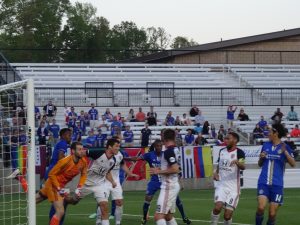 Regarding Miller, “I thought Brandon had an excellent game, and the one play when we really needed a big save, he came up with a huge play,” added Coach Jeffries.

Miller stepped in for the Independence goalkeeper for the first five games Andrew Dykstra who received a call-up to the Colorado Rapids to backup Zack MacMath after Tim Howard earned a red card against Real Salt Lake.  “That’s what we train for throughout the week, someone goes down, the next man is up,” Miller said.  “It’s my job to keep the ball out of the net.”

The Independence will go on the road next week to play the Charleston Battery on May 5th.  They will return home on May 12th back at the Matthews Sportsplex to take on FC Cincinnati at 7:30 pm.