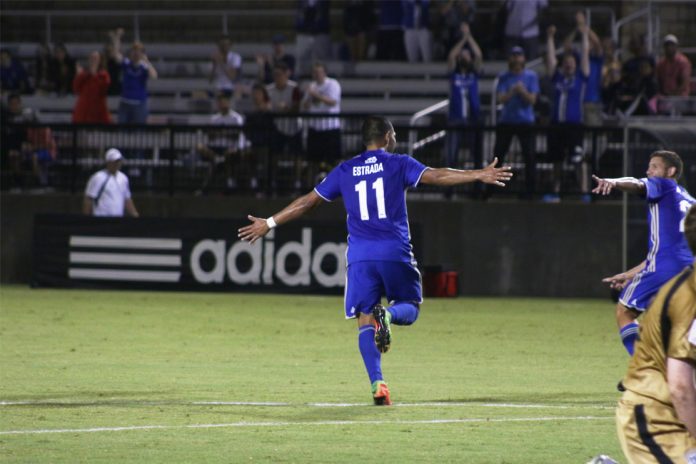 After a 2.5 hour delay in starting the match it appeared the Independence had the upper hand from the very beginning.  The team came out of the locker room ready to rumble and scored with only 12:00 minutes into the game when David Estrada slammed his first goal of the contest setting the pace for a dominating first half by the home team.  The assist goes to Alex Martinez who made a nice pass to Estrada for the score inside the box.

The Independence continued to pressure Rochester and they forced a free kick at 14:20 minutes while the goalkeeper made an outstanding save.  The hometown team continued to control the tempo of the game.  The Rhinos throughout most of the first half were not able to sustain any real offensive possessions.

At 25:00 minutes into the first half David Estrada on a rebound scored again with assists going to Jorge Herrera and Enzo Martinez for an Independence 2-0 lead.

After Rochester pushed forward for their first major drive in the half at 37:00 minutes ended with good save by Cody Mizell, the Independence developed a beautiful counter play by Jorge Herrera who followed with a corner shot at 42:00 minutes that was nicely saved by the Rhinos goalkeeper Dan Lloyd.

The first half ended with 45:00 minutes played plus 2:00 minutes with the Charlotte Independence maintaining a 2-0 advantage.   The home team took 7 shots with 5 shots on target.

The half time intermission was extended thirty minutes due to more inclement weather in the area.  When the action began Independence initially applied pressure on their opponent.  Enzo Martinez at 61:00 minutes took a shot that was saved by the Rhinos goalkeeper.

However, for the final 30 minutes of the match the visitors pressured our defense and forced Independence goalkeeper Cody Mizzell to make two outstanding saves.  Especially a huge save against Graf who had clear shot at the net and Mizell made an unbelievable save keeping the Rhinos from scoring.

With 67:00 minutes into the game Wal Fall scored for the Rhinos on a 12 yard penalty kick on a hand ball foul to potentially put the contest in jeopardy reducing the Independence lead to 2-1 temporarily changing momentum.

Team leading Independence goal scorer Enzo Martinez had a great scoring opportunity in front of the net with the entire left side open and elected to pass instead of aggressively going for the score that could have given the home team a 2 goal advantage late in the match.

The Independence defense played excellent the entire game and goalkeeper Cody Mizzell was outstanding in the net for the home club.

If you are a soccer fan or enthusiast residing in Cabarrus, Mecklenburg, Stanly and Union Counties please venture out to the Matthews Sportsplex to experience professional soccer  action while supporting your local USL team at a beautiful new sports complex.  It’s a great way to spend a fun filled evening with family and friends.