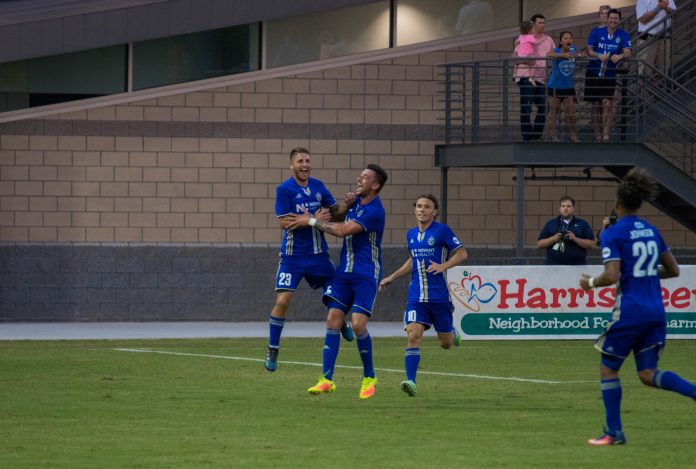 The Charlotte Independence professional USL Soccer team played their first ever home game at the Matthews Sportsplex in front of a sellout crowd.  The night was electric with the crowd buzzing about the home opener.  There was live music provided prior to the game and absolutely thrilling fireworks after the contest with the Harrisburg City Islanders to celebrate the Independence action packed win and the new home stadium.

Going into the game Charlotte had a 3-4-3 record against Harrisburg’s 2-4-5 performance during the early going of this season which will continue into October.  Both clubs compete in the United Soccer League Eastern Conference respectively.

Entering the game Enzo Martinez is currently the leading scorer with 4 goals for the Independence with Jorge Herrera leading with 3 assists.  The team averages 1.50 goals per game, 2.40 saves per game, 1.50 goals against, shots per game 8.80 and 4.60 shots on target.

Enzo Martinez the teams leading scorer earned his second yellow card in the 90th minute of the Cincinnati game and had to serve a one-game suspension for the opener in the new stadium.  However, his brother Alex Martinez scored a key goal for the Independence at the 60:29 mark in the second half of the opener putting Charlotte ahead with a solid lead 2-0.

Jorge Herrera started off the scoring for Charlotte when he scored on a free kick in the first half with 12:30 into the game on the scoreboard clock.  The team for the new home opener wearing their home blue and white uniforms with the support of Novant Health who is the official healthcare provider of the Charlotte Independence looked sharp.

At 36:32 on the clock in the first half Harrisburg midfielder Pedro Riberio tried to score on a free kick after a foul outside the box, however, the shot went wide.  The teams rumbled up and down the large Sportsplex field with Independence controlling the tempo of the game.  The first half ended 1-0 Charlotte having the advantage.  Charlotte had 5 shots on goal compared to 3 for Harrisburg, the Charlotte goalkeeper had 1 recorded save, while Harrisburg recorded 3 saves in the first half.

During the second half the tempo of the game continued at a high intense pace with Charlotte taking full advantage of the large field which suits their style of play.  The team played outstanding defense throughout the contest and the goalkeeper Cody Mizell made some tremendous saves to keep the City Islanders from scoring particularly in the last 45 minutes of the game.

Soccer fans of all ages should come out and support the team while enjoying the new stadium to see all the action from nearby Mecklenburg, Union, and Cabarrus counties including the surrounding area down south to Rock Hill, SC the home of the Martinez brothers Enzo and Alex.