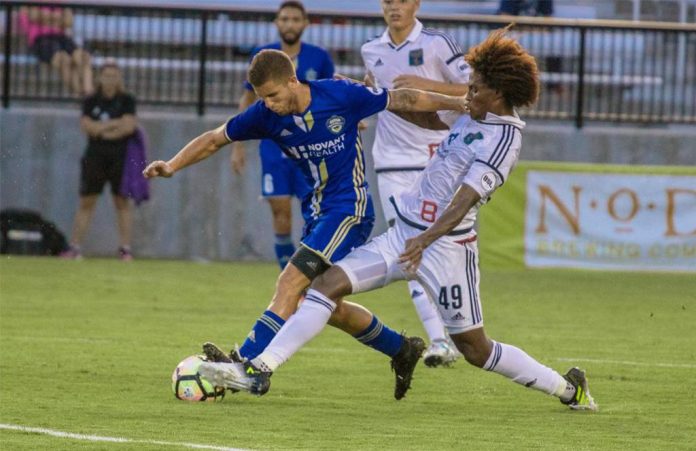 After a challenging road trip through Canada where the team tied Toronto 2-2 and lost to Ottawa 3-1, they bounced back at home with an important 1-0 victory over a good USL Eastern Conference contender from Bethlehem.

The Jacks had their backs to the wall with Charleston and Louisville both tied for second place hot on their heels.  They had to get the win and come out with 3 huge points to maintain their first place lead with 43 points posting a 12-4-7 record.  The two second place teams have 38 points and play again on Saturday.

Forward Enzo Martinez scored his 13th goal with a corner shot into the net at 33 minutes into the contest which held up for the game winner.  Martinez is only two goals behind the leagues leading scorer.  He has 13 goals and 5 assists this year with nine games remaining on the 2017 regular season schedule.

The good news is the Independence continue to have an unbeaten streak at home, they will play six of their nine remaining games at the Matthews Sportsplex giving them home field advantage for much of the season.

The team has now played together for approximately 25 games from last season so they appear to have developed some good chemistry and have a solid understanding of what to expect from their teammates.  The forwards are pushing the envelope and are applying a lot of offensive pressure on their opponents.  Martinez, Jorge Herrera, and David Estrada have all been outstanding throughout the campaign to date.  The defense is completely focused on preventing the competition from scoring and are playing very aggressively getting great results.  The defensive trio of goalkeeper Cody Mizzell and defenders Bilal Duckett a local player and Henry Kalungi have truly become a very cohesive unit.  The addition of Donnie Smith has only made an already solid defensive unit stronger.  This run has been a complete team effort and it’s become real exciting to watch the transformation.

The Independence will look to continue their winning ways this Saturday night August 19th when they host the Orlando City B team.  They will remain home all week to get a much needed break and will play again on August 27th when Toronto comes into town to play at the Sportsplex.

Both upcoming games are huge for the Independence and will start at 7:00 PM.  Local soccer fans should come out to the Matthews Sportsplex to cheer the home team on to victory.  However, if you cannot make both games they can be viewed on Spectrum Channel 1261.