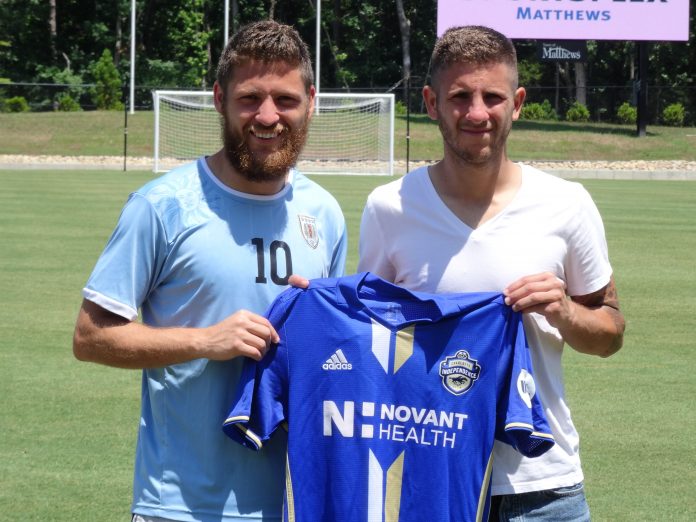 The two brothers originally from Montevideo, Uruguay migrated to the United States as young children with their family and settled down locally in Rock Hill, South Carolina.  They both played on local clubs growing up developing their soccer skills and eventually went on to play soccer at Northwestern High School.  While in high school they played together on  three State Championship teams from the York County school district.

Enzo who is the older sibling attended UNC-Chapel Hill and was a member of the National Championship Tar Heel team in 2011.  Enzo is a Forward and is currently the leading goal scorer with 4 goals on the United Soccer League (USL) hometown Charlotte Independence professional soccer club.  This is his third season with the Charlotte organization.

Previously Enzo also played with the Carolina Railhawks, and was drafted in the first round by Real Salt Lake of Major League Soccer (MLS) in 2012 where he played for two seasons.  When he is not on the field with the Independence, Enzo is a coach for the Discoveries Soccer Club in Rock Hill.  The club provides opportunities for players from the ages of 5-18 of all skill levels to participate in programs, camps, and tournaments in the York, Chester, Lancaster and South Charlotte area.

Enzo considers himself to be very fortunate to be playing professionally.  “It’s a privilege to play in the USL at the highest level of soccer in the area,” said Enzo.  He also mentioned the Matthews Sportsplex is the perfect setting for the team and wants every game to be packed with soccer fans.

Meanwhile, brother Alex who scored the second key goal against Harrisburg this past weekend at home is also very pleased with the new stadium at the Matthews Sportsplex.  “The field is tailor made for our team and style of play.  It’s truly a good feeling to have a perfect stadium complex we can call our home, it should give us a psychological edge when playing at home in front of a sellout crowd,” said Alex.

Alex played his college soccer at North Carolina State University.  He was drafted in 2014 by the Sporting Kansas City in the MLS as a Midfielder and played one season for the franchise.  However, he had the opportunity to play professional soccer locally with the Charlotte independence in 2015 and jumped at the opportunity to be close to Rock Hill and compete on the same team as his brother Enzo.

The Martinez brothers ultimate goal is to bring back a championship to the Charlotte area.  They both stated the team has a lot of talent and the players have competed at a very high level throughout their entire playing careers both internationally and as professionals.

The coaching staff is excellent with a great deal of knowledge and experience, the ownership is very supportive and the fans have been simply fantastic according to the brothers.  “We hope we can put on a good show at every home game for the fans and play an attractive style of soccer,” said the dynamic duo.