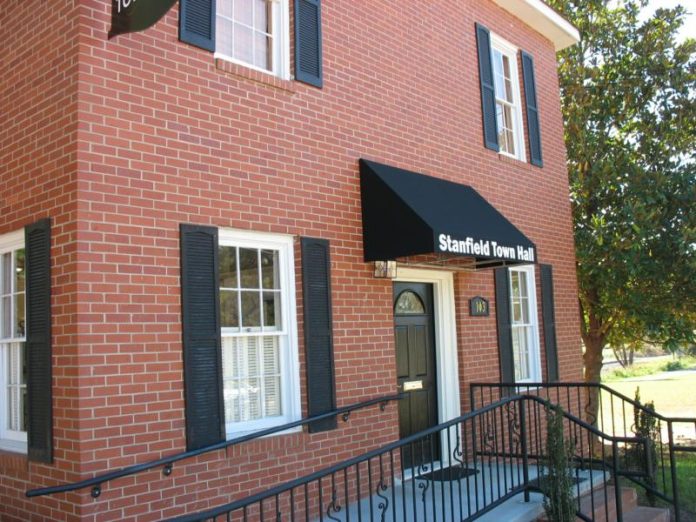 There was standing room only Thursday evening during the May meeting of the Stanfield Board of Commissioners. Town residents filled town hall awaiting information regarding the potential rezoning of a plot of land between Renee Ford Road and Browns Hill Road.

The 76 acre tract of land was recently purchased by the county as a site to develop for industrial use. Andy Lucas, Stanly County Manager, addressed the board regarding the county’s request for rezoning of the property.

“We trying to develop places where we can grow jobs, more industry and tax base for Stanfield and generally for Stanly County,” said Lucas.

“The western part of the county is critical to our future economic development,” he added.

The goal of the project is to help Stanly County become more competitive with surrounding counties in attracting business and jobs to the county.

“One of the things we run up against all the time is Cabarrus County and Union County have more readily accessible and available product that we do,” Lucas stated. “It’s very difficult to compete with our current privately developed parks…when the asking price for the land is much higher.”

Also, many of the privately developed industrial parks in the area were not developed with the idea of selling large acre tracts of land, making it difficult to compete for industry looking for a tract of land with space to build a 50,000 to 100,000 square foot building, Lucas said. He also pointed out, although there are some older buildings available, Stanly County does not currently have a 50,000 to 100,000 square foot building that is desirable to attract industry.

If the land is rezoned for industrial use, the project is laid out in phases. Phase one of the project is planned to be developed on Browns Hill Road. The county’s goal is to grade the land, develop a road and bring water and sewer infrastructure to attract a private sector individual to build a 50,000 to 100,000 square foot building.

“This will be an attractive park that will have restrictive covenants and will have buffers,” said Lucas. “It’s a place where folks are going to want to come and make investments and, when you drive out there, you can be proud to be a Stanly County resident.”

Following his presentation, Lucas answered questions from the community outside of town hall as the board concluded the town meeting. A public hearing on the matter is scheduled for the next regular Stanfield town meeting on Thursday, June 1 at 7 p.m.