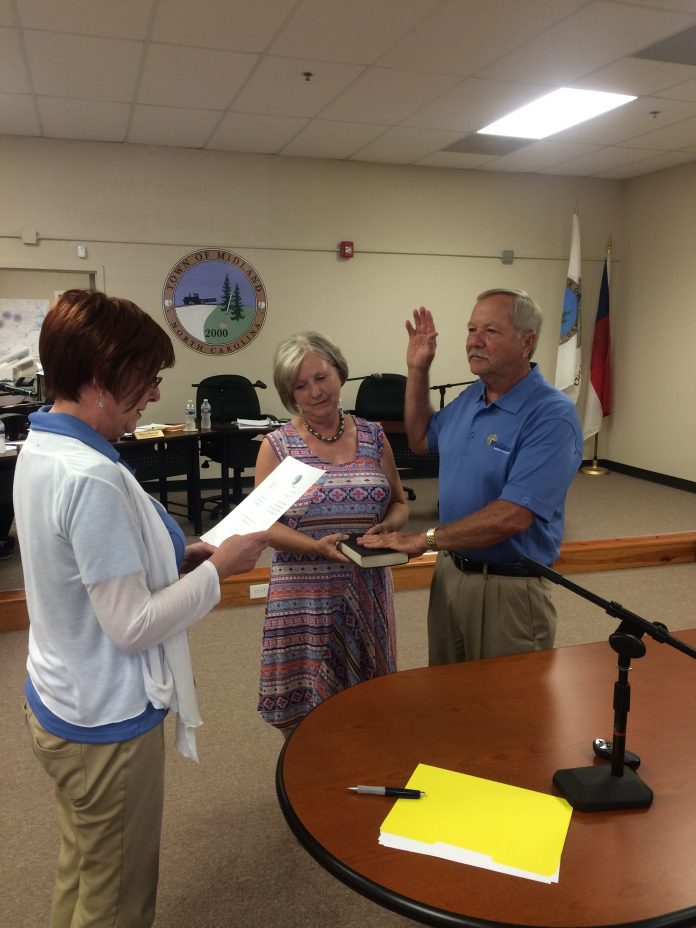 At their July 11 meeting, the Midland Town Council voted unanimously to appoint Mayor Pro Tem John Crump as the new Mayor of the Town of Midland.

With Mayor Kathy Kitts’ passing after a prolonged battle with cancer, the Town Council was required to appoint a replacement to serve the remainder of the unexpired mayoral term under North Carolina State Statute 160A-63. With the unanimous appointment, Mayor Pro Tem John Crump was sworn in by Town Clerk Nancy Boyden and assumes all mayoral responsibilities immediately.
Crump previously served as the Mayor of Midland from 2005 through 2009. He rejoined the Town Council in 2013, and was appointed Mayor Pro Tem in 2015.

Prior to the town being incorporated in 2000, Crump served as the President of the Midland Community Association and was active as a volunteer firefighter and EMT. He is retired from AT&T, and also retired from firefighting. Crump’s prior service was honored by former Governor Pat McCory who awarded Crump with the Order of the Longleaf Pine for his many years of community and public service. Crump has filed to run for Mayor in the upcoming 2017 election.

After the above appointment, the Midland Town Council voted to appoint Councilman Darren Hartsell as the town’s new Mayor Pro Tem. First elected to the Town Council in 2015, Darren Hartsell was sworn in by Town Clerk Nancy Boyden and assumes all responsibilities of his new position immediately. A Midland native and successful businessman, Hartsell is currently an award winning Masonry Teacher at Jay M. Robinson High School where he was named the North Carolina Construction Trade Teacher of the Year and also received the Cabarrus County Impact Through Education Award. Hartsell began the masonry program a Jay M. Robison High School, which has given students multiple career options in the construction trades. Hartsell will be up for re-election during the 2019 election.

After Hartsell’s appointment to the position of Mayor Pro Tem, the Midland Town Council voted to appoint former Councilman Mike Tallent to the town’s vacant council seat. Tallent first served on the Town Council after being elected in 2007. He served as Mayor Pro Tem from 2011 through 2015. In March of 2015, Tallent was elected Chair of the Cabarrus County Republican Party, a role in which he could not hold local elected office. As a result, he did not run for re-election to the Town Council in late 2015. A close friend of the late Mayor Kathy Kitts, she requested that he re-join the board during her final weeks. Tallent and the Midland Town Council honored her request. Tallent will run for re-election in the upcoming 2017 election.

Midland Town Manager Doug Paris states “This is still a solemn time for our community after the passing of Mayor Kathy Kitts. The community is very fortunate to have three experienced leaders that were willing to step in and serve during this time.”