The Locust Fall Festival will be held Tuesday, October 31 from 6-8 p.m. at the Locust Ball Park. As in years past, the free family event is planned as a safe alternative to traditional trick-or-treating. The festival will feature games, candy, inflatables, hay rides and hot dogs.

The Locust Christmas Parade is scheduled for Saturday, November 25 at 3 p.m. to celebrate the beginning of the holiday season. 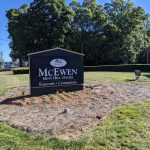