Angela Brown wants people to know that sometimes life does not turn out the way you planned. “Situations change and you must be determined to succeed no matter what life brings at you,” explained Angela, a 2018 graduate of the Information Technology Business Support Degree at Stanly Community College. Angela thought she would retire happily at her old job in the manufacturing industry but ended up hurting her back and had to have surgery. Little did she know that the situation would change the trajectory of her life.

“I was told by my surgeon that I would never be able to work in a physical labor job again, at least not like I had in the past. After getting back on my feet, I started looking for work, and there was really nothing out there except retail and restaurant work. There is nothing wrong with those professions, but I could not be standing for any length of time with my back the way it was. Family and friends asked me about going back to school, but I was afraid of going back at my age. I felt like I would not fit in or be smart enough to do the work,” Angela recalls.

It was not long before her negative thoughts soon became distant memories, and she enrolled in the IT Business Support program in the fall of 2016. Angela admits she has always had an interest in computers but didn’t quite understand how they worked. “The only thing that I did on my computer at home was play games. I never sent an email until 2014. Wow, talk about being behind on technology!” Angela felt her experience at SCC was exceptional. “I felt like every instructor I had actually cared if you succeeded or not; they were always available for questions and would stay after class if necessary. I am grateful for the instructors that I had and feel they contributed to my success,” she said.

Today, Angela finds herself working in a field that she never thought possible; she is an administrative assistant at the Law Offices of James A. Phillips, Jr., in Albemarle. “Working at the law office is a whole new world for me. I did not know the lingo or realize how much preparation goes into a case when I first got started. There are so many different documents to prepare, in order and on time,” she explained.

James A. Phillips, Jr., stated, “During the last five months, I have had the opportunity to work with Ms. Angie Brown on a daily basis. Ms. Brown, while employed with my law firm, has exhibited all the characteristics of a successful employee – a willingness to learn new tasks, a dedication to accomplish goals in a timely fashion and a general disposition to work with and assist others. Overall, I would characterize Ms. Brown as an extremely valuable asset to our law firm and a great coworker.”

Additionally, Angela works part-time for Uwharrie Players as an administrative assistant. “I had never been to a community theater production before, much less worked to help make one happen. There is a lot of behind-the-scenes effort that takes place long before you see anything on stage,” she noted.

Angela wants to thank Rita Chrane, SCC’s Dean of Technology and Engineering for helping her with employment. “Mrs. Chrane facilitated both jobs that I currently have and for that I’m very thankful. Her contacts with Vicki Coggins and Karmen Phillips led me to the jobs that I currently have. I am very fortunate to have the opportunities that I have been given. I’m grateful to both employers for giving me a chance. I feel really blessed.”

Angela wants potential students to know that sometimes fear is a detour, but it can also be a great motivator. “For me, it took taking that first step. I was scared, but once you take that first step, you take another and another and next thing you know, you have made something happen for yourself and the fear has melted away.”

Angela spends her spare time with her family watching football games, races, UFC fights and having cookouts. Her son attends UNCC, and she enjoys spending time with him between his schoolwork and his job. During the summer, she and her fiancé enjoy spending time at the Carolina beaches. 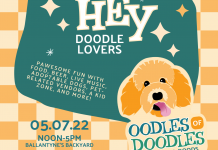 Oodles Of Doodles Is Taking Over Ballantyne’s Backyard