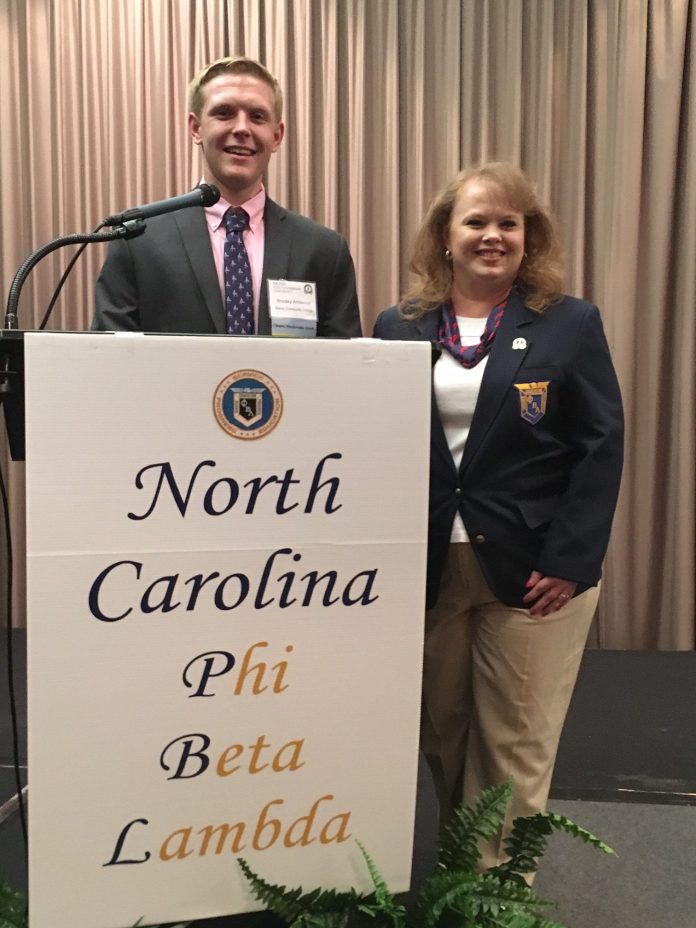 Meeting at the Charlotte University Place Hilton, the conference began with the announcement of seven chapters receiving the state Legacy Leadership Awards for accomplishing a list of goals related to local, state, and national projects and participation. Chapter President Amy Ray accepted SCC’s plaque as well as special ribbons for delegates from the “Legacy” chapters to wear on their name badges.

The Legacy Leadership Award is named in honor of six former local chapter advisers who had served as least 20 years with the organization at the time of their retirement or passing. Presenting the awards was Mr. Dwain Perry, a 1997 retiree from Haywood Community College.

She spoke to the group about both the challenges and rewards of business, as well as the importance of businesses being involved in community improvement activities. In addition to her work as a financial  advisor, Ms. Hayes’ work with SWAN (Stanly Women’s Associated Network) was highlighted in her nomination.

Two of the eight seminars held during the conference were led by local business and civic leaders Rita Love and Charlotte Maness.

Following two days of “Soar With Sams” campaigning, Katrina Sams from SCC was elected as state president. Ms. Sams served as chapter president in 2015-2016 and state historian in 2016-2017.

The 2016-2017 year marked the 75 th Anniversary of Future Business Leaders of America (the secondary level) and Phi Beta Lambda (the collegiate level) as a national organization.

A highlight of the conference was a general session at which five former state presidents spoke on how their involvement in the organization had benefitted their careers. Included were John Anderson (2010-11) and Sam Miller (2011-12), both graduates of Stanly Community College and Pfeiffer University.

Twelve former state presidents were brought on stage as Ms. Brown was presented an NC PBL Honorary Life Membership. In addition to Mr. Gardner, Mr. Anderson, and Mr. Miller, other presidents from SCC were Carolyn Rabon Laudati (1986-87) and Chuck VanHoose (2014-15).

Tony Lundry and Brooke Zerweck received First Place in Hospitality Management. Following a written test, the team presented their solution to a case study before a panel of three judges.

Bradley Arrowood received First Place for his Small Business Management Plan.  A written document and a presentation on the plan were scored for the award.

The formal Awards Banquet concluded with Ms. Ray and 11 other members from across the state being inducted into “Who’s Who in North Carolina Phi Beta Lambda” and the announcement of five chapters, including SCC, being named as the state recipients and nominees for national “Gold Seal Chapter” designations.

Accompanying the students at the conference were Faculty Advisers Dana Chaney and Dan Hazlett.

“We are, of course, extremely proud of the Stanly students for their dedication throughout the year,” Mr. Hazlett and Ms. Chaney commented. “The First Place Annual Report is a reflection of how active the chapter was in regard to local programs, state projects, and national involvement. Katrina Sams has provided outstanding local leadership and we are excited to see her as the state president for the upcoming year. We appreciate the support of the SCC administration, faculty, and staff for PBL and other student organizations which provide the leadership training that will help our students be successful in their work and in their communities.”