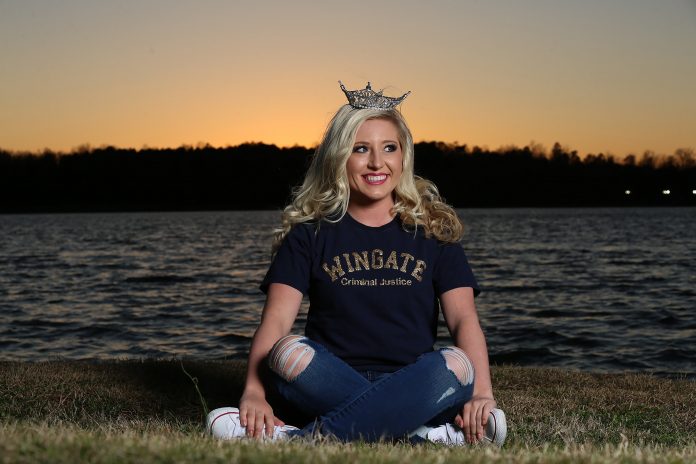 It’s going to be a stressful week for Wingate University senior Macy Stutts.

Starting on Tuesday, Stutts will have to strut her stuff, demonstrate her fitness and put her knowledge and poise on display with the Miss North Carolina crown on the line. If fortune falls her way, the 21-year-old criminal justice major will be one of 11 contestants doing it all over again during Saturday night’s finals.

Stutts says that she’s thrilled to represent Gastonia in the pageant and that she’s already benefited from the Miss America system, an organization she’s been involved with for six years.

A native of Locust, Stutts began competing in the Outstanding Teen division at age 15 and won her first local title in 2013, representing Stanly County in the Miss North Carolina pageant the following June. She didn’t win, but she kept working at it “for the growth I continue to see in myself each and every day,” Stutts says.

“Whether it’s walking out of any interview feeling my absolute best, or tripping on stage in a swimsuit and six-inch heels, I am more humble and self-aware because of it,” she told friends on social media a few days ago. “My failures have shaped my successes.”
Still, like the 43 other contestants at Raleigh’s Duke Energy Center for the Performing Arts this week, she’s looking for success. Win or lose, she says she’s more relaxed, more prepared and more herself than last go-around.

“It went well last time, but I was not as comfortable with myself as a person as I am now. At times I was listening more to other people about wardrobe or other choices and wasn’t necessarily showing the real me,” Stutts says. “This time it’s completely, one-hundred-percent me, with nobody altering any of my decisions — completely genuine. So if that’s who they want in a Miss North Carolina, that’s who it will be.”

“She makes you feel like you are the only person in the room,” she says. “That’s how I want to be.”

She’s also taking inspiration from her voice coach, Dan Truhitte, who played Rolf in the 1965 movie “The Sound of Music,” singing “Sixteen Going on Seventeen” to Liesl Von Trapp (played by Charmian Carr). The veteran actor gives private voice lessons from his home in Concord, North Carolina, where Stutts has shown up every Tuesday since last October.

“He has been phenomenal. He has believed in me from the beginning,” Stutts says. “He had this integral role in ‘The Sound of Music,’ but he is the most humble guy ever.”

It was Truhitte who helped her choose the song she’ll sing for the talent competition, Elvis Presley’s “Can’t Help Falling in Love.” By the time she gets to sing on Friday, she’ll have already completed the other phases of the competition. She said interview is the portion she’s both most nervous and most excited about.

“You have no idea what the judges will ask you, but it’s my favorite phase of the competition, because it’s where the judges get to know you,” Stutts explains. She’s hopeful they’ll ask about her platform, Communities Offering Police Support (COPS).

“I’ve grown up as a police officer’s daughter; I’m a criminal justice major; so I really want to talk about that,” says Stutts, who has had a chance to network with officers and members of the public since being crowned Miss Gastonia last August.

“The community has been very receptive, and the police have been really helpful. They do a lot already with trying to build community relations,” says Stutts, who presented the trophy at a recent Battle of the Badges charity softball tournament and took part in Shop with a Cop.

In addition to knowledge gained in her criminal justice classes, Stutts says Wingate has helped inform her platform by giving her multiple avenues to reach out to others.

“One of Wingate’s mottos is service, and the university has given me so many opportunities to serve,” she says.

Between her appearances as Miss Gastonia on nights and weekends, her criminal justice classes and her voice lessons, Stutts has carved out time for fitness training, taking advantage of the University’s new McGee Health and Fitness Center.

Ultimately, when viewers tune in to ABC11.com to see the 80th Miss North Carolina crowned on Saturday night (7 p.m.), she hopes they’ll see the best Macy Stutts she can be. Until then, visitors to the station’s website can click on the Miss North Carolina People’s Choice link to view videos of Stutts and other contestants and cast their vote. The People’s Choice winner will be guaranteed a spot among Saturday’s finalists.