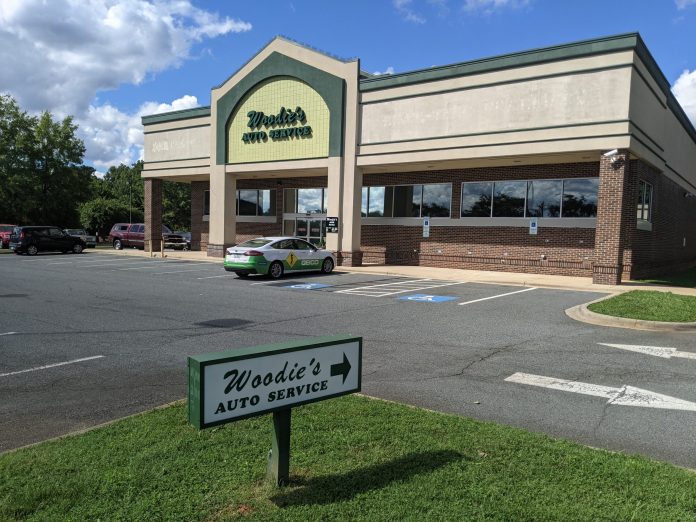 MINT HILL, NC – “You’ve got to have two qualities to work for Woodie’s,” says Owner Brad Woodie.  “One, you’ve got to be completely honest and ethical, and number two, you have to have a serious commitment to exceeding the customer’s expectations.”

Woodie’s Auto Service and Repair’s commitment to excellence began almost six decades ago.  In the mid-1940s, Brad’s father, Ernest Woodie, returned from World War II and relocated to Charlotte from the North Carolina mountains.  “The genesis of franchising was beginning in the 50s and 60s,” Brad explains.  “If you put your pennies together, you could buy a franchise.”  In 1963, Ernest saved enough to purchase a Humble Oil franchise.

The station (which would become an Esso before he even got the keys) was located on the corner of Albemarle Road and Independence. Esso (now Exxon) is known as a gas station and convenience store today, but things were different over half a century ago.  “Those were the old timey service station days,” says Brad.  “He did everything: fix cars, sell gas, the whole ball of wax.”

Long before it was Woodie’s in name, Ernest Woodie’s shop was a family business.  Ernest’s wife Christine played an integral role, too; in the early days, she’d often fix Ernest’s dinner and drop it off at the station, and on cold winter days, she’d bring thermoses of hot coffee for all of the men.

Increasing traffic on Independence in the mid-1970s meant that Exxon wanted a 24-hour store at that location.  With two young boys, Ernest wasn’t interested in working around the clock, so he moved to the Charlottetown Exxon located on Kings Drive.  Unfortunately, tragedy struck the Woodie family when Ernest passed away unexpectedly in 1981.

“My dad was only 52 years old,” recalls Brad.  “Nobody planned for that.  We had to go to work, and that’s what we did.”  Brad and his brother would continue to run the store on Kings Drive into the new century.  “We had a good reputation.  Oil companies liked us, and we got a couple more stores through that,” says Brad.  “As Charlotte grew, we grew with it.”

In the early 2000s, they decided to make a change.  “The gasoline business is sort of crazy!” says Brad.  “A lot of times you’re selling gas at or below cost.  With auto repair, if you’re honest and ethical, you can develop a good clientele.  Gasoline is not like that.  It’s 100% price-driven.  If you’re two cents higher than the guy across the street, well, there’s no loyalty in the gasoline business.  We decided, let’s just do what we’re good at, and let’s stay on the service side of things.”

Woodie’s first sole auto center was and still is located on the corner of McDowell and Morehead.  Purchased from the Gordon family, who opened the store in 1948, it became the first Woodie’s Auto Service and Repair in 2001.

Over the last 20 years, Woodie’s has steadily expanded to 14 locations across Charlotte.  The Mint Hill location on the corner of Lawyers and Wilson Grove Roads opened in August of 2020. Converting what was a Rite Aid store into one of the newest Woodie’s locations required some creativity, but Brad was up for the challenge.  The large, 12,000 square foot store boasts a spacious, modern, indoor bay for working on vehicles.

In just one year, Woodie’s Mint Hill location has amassed a large customer base.  “The community has really embraced us,” says Brad, who likes to spend the beginning weeks at a new store personally greeting the customers that come in.  “Mint Hill, probably more so than any new store that we’ve opened up, has really welcomed us.  It’s been really rewarding to hear people say that they’re glad we’re here.”

Nowadays, Woodie’s does all manner of auto repair and maintenance: oil changes, routine mileage checks, brakes, tires, transmission work and engine work, to name a few.  They repair and service all makes and models of foreign and domestic vehicles, including cars, SUVs, light trucks and even diesels. “We do basically everything except paint or body work,” says Brad.  “We don’t do any collision repair or any paint.  Nowadays cars are very reliable,” he continues, noting that the average car on the road in the United States these days is 11 years old.  “They’re much more reliable than the old days, and we really just do a lot of regular old-fashioned maintenance.”

Woodie’s has a reputation in the community for high quality work, and they back that up with one of the best warranties in the industry: three years or 36,000 miles, which is triple the warranty most manufacturers offer.  But what really sets Woodie’s apart in the auto repair industry boils down to one simple thing: service.  “We’re all about service,” says Brad simply.  “That’s really it.  It’s nothing really rocket science to it.  It’s a simple equation, and it’s really paid dividends for us.”

“The quickest way for immediate termination is to ever try to sell anybody anything that they don’t actually need,” continues Brad.  “Our father instilled in us from the very beginning that it’s far better to make $1 off a customer’s transaction and have them come back for 30 years than to make $100 one time and leave them feeling so taken advantage of that they never come back.”

Superior service permeates every aspect of the experience you’ll have as a customer at Woodie’s.  Digital inspections with accompanying pictures and videos help customers see issues where terminology can cause miscommunication or confusion.  Comfortable waiting rooms stocked with free snacks and drinks make whatever car problems you’re having seem just a little better.  Free shuttle service to home, work or wherever you need to go while your car is in the shop makes fitting in routine maintenance a breeze.

Woodie’s even offers “concierge service” that makes it possible to have your car serviced without ever bringing it in.  “You make an appointment online, and we’ll come to your home or office,” says Brad.  “We take the car into the shop and do whatever maintenance or service is required.  We can email back and forth for quotes or recommendations, then put it back in its parking place and have the customer pay online.  It’s easy peasy.”  Originally created with busy executives in mind, Woodie’s concierge service gained popularity during COVID as a way to provide a contactless transaction.

“It really is this simple,” says Brad.  “It’s just service, service, service.  We’re a car business of course, but really we’re in the people business.  I tell all our technicians to pretend this is your eighty-year-old grandmother’s car and she’s driving cross-country for vacation tomorrow,” he continues.  “For most people, a car is their second most expensive investment just behind their house.  The biggest thing is really just helping customers get as much life and good mileage out of their cars as possible.”