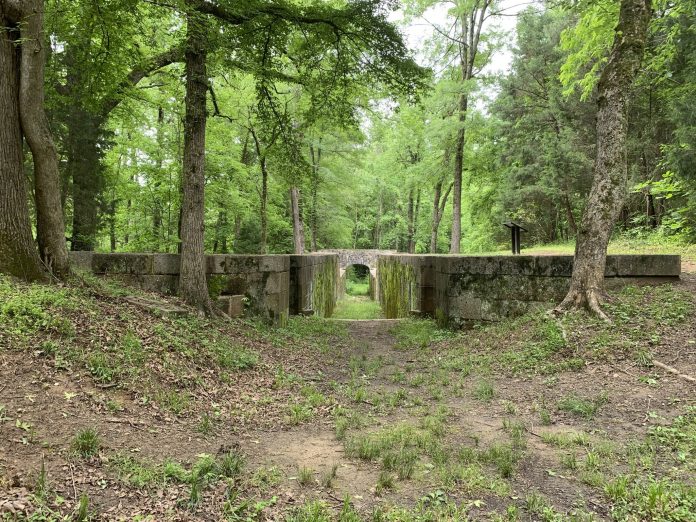 If you’re looking for a cool family road trip this summer, consider heading down to Landsford Canal State Park in Catawba, SC.

One of thirty-seven state parks in the state of South Carolina, 448-acre Landsford Canal is home to several unique natural and historical features you won’t find at any other state park or historical site.

Located along a two-mile stretch of the Catawba River, Landsford Canal State Park sits on a fall line, an area where an upland region and a coastal plain meet.  The results is shoals and rapids that made the area un-navigable for 19th century merchants. The canal at “Land’s Ford” was part of a system of canals built along the Catawba and Wateree rivers that made the area commercially navigable from 1820 to 1835.  At one time, the canal was an important trading route between the foothills and the coastal plain.

The modern-day state park features the well-preserved remains of the canal including three sets of locks, a mill site, a miller’s house and a lockkeeper’s house in various states of decay.  Remnants of the 200-year-old original canal stonework and the “locks” that equalized the water can still be seen toward the south end of the 1.5-mile Canal Trail.

The ingenuity and craftsmanship that went into building the canal over two centuries ago are evident in portions of the canal that have survived the years relatively intact.  Much of the canal’s construction was completed by hand, including drilling holes to blast out bedrock, shaping rough field stones and stone cut out of the canal bed, placing stones and carrying or dragging out trees and excavated materials.  Larger stones were lifted into place using a system of timbers and pulleys.

The exposed bedrock and elevation changes that necessitated the Landsford Canal also create a set of rapids suitable for canoeing or kayaking.  The rapids in this part of the river are usually class I or II but can become class III if the water flow is right. A drop off area near the park provides canoe access to the Catawba River.

Landsford Canal State Park is also home to a nesting pair of bald eagles.  Mates for life, the pair are permanent residents of the park, opting to take advantage of easy access to fish in the Catawba River in lieu of migrating as others do.  The female has laid eggs every February since the mid 1990s. Her fledglings learn to fly and leave the nest every year by late May, allowing park patrons to witness the birds in their nest from park trails for roughy six months of the year.

In addition to the park’s unique features, Landsford Canal offers many of the amenities you would expect to see in a state park.  In addition to the popular 1.5 mile Canal Trail, the park also offers two short hikes: the Nature Trail along the banks of the Catawba River and the Eagle Point Trail, which ends at a bluff overlooking the river.  The park contains playgrounds, a rentable picnic shelter and several geocaches.

Located about forty minutes from Waxhaw and a little over an hour from Charlotte’s Eastern suburbs, Landsford Canal State Park is a great way for your family to enjoy a day of outdoor fun and education this summer!