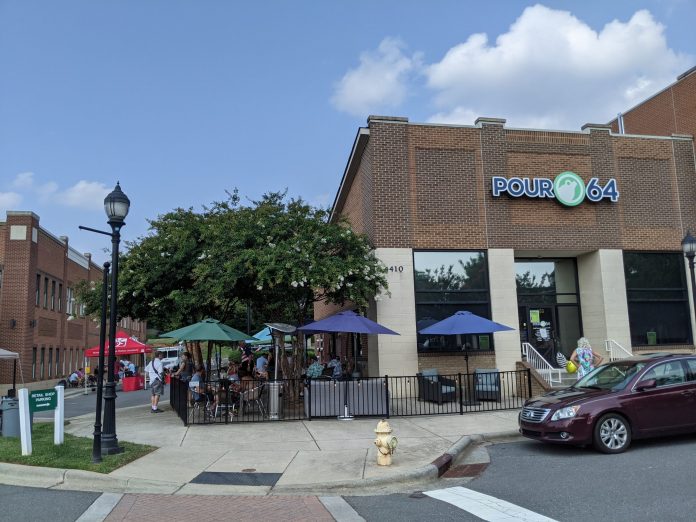 MINT HILL, NC – On Saturday, July 24, Pour 64 celebrated its 4th Anniversary with the first large gathering the local tap room has been able to hold in over 18 months.

Although they announced their third anniversary last July, Pour 64 was still only able to offer curbside service due to COVID restrictions.  It wasn’t until the spring that they were able to open to 30% capacity; that number quickly rose to 50% and reached 100% just two months ago in mid-May.

More than just celebrating four successful years in business, Saturday’s well-attended event also marked a much-anticipated return to normalcy.  “I wasn’t expecting the turnout we got based on COVID and everything we’ve gone through the last year,” said owner Sarah Brock, “but people came up to me multiple times throughout the event saying, you should do this once a month, an outdoor event.”

In addition to Pour 64’s 40 rotating taps, the event involved selections from guest brewery Town Brewing.  “We wanted to support a local craft beer, and Town Brewing has been a great supporter of Pour 64 ever since they opened,” said Brock, “so we wanted to just thank them in that way and highlight some of their beer.”

The event also featured live music from Dan Vitco and Jaxx & Jacks, both local musicians and Pour 64 favorites.  “Jaxx & Jacks have played all of our three celebrated anniversary parties,” said Brock,  “and Dan Vitco is just a Mint Hill favorite.  He lives in Mint Hill, and he is a really great musician; people come out for him all the time.”

Pour 64 works with the Chamber of Commerce to sponsor a Cornhole Tournament benefiting the Chamber’s Scholarship program in October, but Saturday’s celebration also featured a small Cornhole Tournament with a cash prize.  The man who won the tournament chose to donate the money back to Pour 64, and Brock looks forward to finding a worthy cause on which to spend it.

Also present were two food trucks: Chick-fil-A and Wrap ‘n Roll.  For Brock it’s important to build a relationship with soon-to-be new neighbor Chick-fil-A.  Just like Pour 64, Chick-fil-A prioritizes serving the community, and Brock hopes they’ll be able to partner on charitable initiatives in the future.  Moreover, Brock has talked to Chick-fil-A about the possibility of having food delivered to customers who order from the tap room.  “People are so excited about Chick-fil-A,” says Brock.  “Plus, every time we have anything at Pour 64, it’s always a family event, and kids love Chick-fil-A!”

Now that they’re open for business again, Pour 64 looks forward to resuming several much-anticipated events that had to be suspended during COVID.  Their next big event will be Oktoberfest scheduled for October 2.  Held in conjunction with 1st Choice Properties, the event will feature live music, food trucks, family games and a costume contest that will decide the next Mr. and Ms. Oktoberfest.  Brock also looks forward to organizing the annual Pop Up Christmas, currently scheduled for the second Saturday in December.  Held in partnership with the Chamber of Commerce, the Pop Up Christmas Shop aims to highlight local businesses – particularly Chamber members – that aren’t walkable from downtown Mint Hill as well as locals who make handcrafted items.  The last Pop Up Christmas Shop held in 2019 featured 40 different vendors, and Brock hopes to increase that number to 50 in 2021.

“What I’d really like to say is that we are so thankful for the community for supporting us through 2020,” said Brock.  “I just want to thank them for everything because I thought for sure we were not going to make it. Because there’s no way we should have made it and other people didn’t.  We’re just a craft beer tap room, and I’m just really thankful to be able to be here in 2021 and still serving the community.”

But the truth is that Pour 64 is more than just a tap room: it’s a place where the community comes together.  “So many friends have been made here,” continued Brock.  “I was just talking to someone the other day who said they didn’t know half these people until they started coming in here, and now they are vacationing together, camping together, spending time on the weekends together outside of here.”

Pour 64 is open Tuesday through Thursday from 3:00 pm to 9:00 pm and Friday and Saturday from 2:00 pm to 10:00 pm.  They offer Music Bingo every Wednesday at 6:30 and frequently host food trucks on Wednesdays and Thursdays.  They also offer live music several times throughout the month, usually on Friday and Saturday nights.  They continue to offer online ordering and curbside service, including their popular 32-oz “crowlers.”  The best way to keep up with what’s going on at Pour 64 is to follow them on Facebook @pour64.