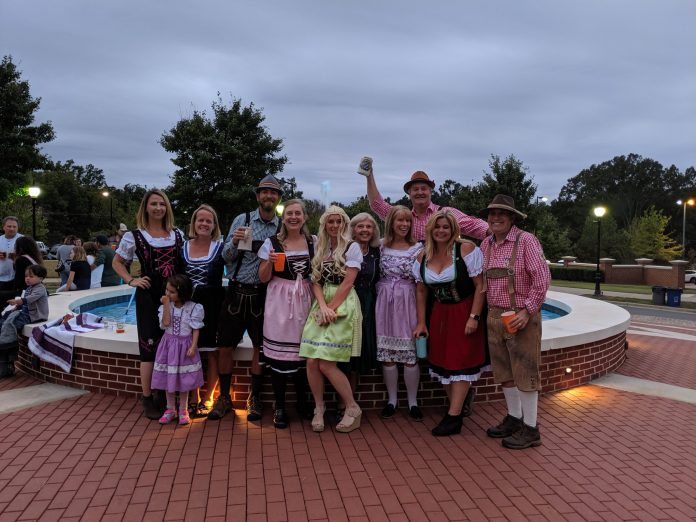 A tradition in Germany for over 200 years, Oktoberfest started in 1810 with the wedding of Princess Therese of Saxony-Hildburghausen to King Ludwig I.  The festival was so popular that the Royal Family celebrated again in 1811, beginning a tradition that would only be suspended in times of war and cholera.  Today the celebration of Bavarian culture running from the third weekend in September through the first Sunday in October is celebrated not only in Munich but in cities across the world.

On October 2, the tradition continues right here in Mint Hill Village with Mint Hill’s second annual Oktoberfest!  The first Oktoberfest in 2019 brought over 3000 people to Mint Hill Village.  After a year off due to COVID, Pour 64 Owner Sarah Brock and 1st Choice Properties Owner Anna Granger are excited to bring Mint Hill together once again for lager, schnitzel and strudel!

This year’s festivities will once again include food for purchase from Strudelteig, a frequent visitor to Pour 64.  The popular food truck offers traditional German fare from savory breaded pork cutlets on fresh kaiser rolls and scratch-made beer pretzels to sweet strudels.  Olde Mecklenburg Brewery will also be on site serving up seasonal brews like their “Mecktoberfest” marzen lager.  Of course, all of Pour 64’s forty rotating taps will be available featuring everything from IPAs and pale ales to stouts as well as ciders, ginger beers and sours.

The family-friendly festival will feature a DJ, a photo area, and team-oriented games.  For Granger, one of the highlights of the celebration is the costume contest to crown Mr. and Mrs. Oktoberfest, the man and woman in attendance with the best Bavarian attire.  Mr. and Mrs. Oktoberfest will each win gift certificates to the Waldhorn German restaurant courtesy of 1st Choice Properties.

“The first year, I don’t think people were really sure whether to do it or not,” says Granger, who’s already planning her costume complete with a new wig, “but it’s so fun when they do! Everyone should definitely dress up; that’s half the fun of Oktoberfest!”

But mostly, Brock and Granger are looking forward to bringing the community back together after a difficult year and a half.  “Sarah says people keep asking, ‘Are you going to do it again?’” says Granger.  It was chief on people’s minds at Brock’s recent 4-year anniversary celebration, the first large-scale gathering Pour 64 has been able to hold in over 18 months.  “I loved to see everyone come out for that, and people just love that kind of event,” says Brock.  “People came up to me multiple times throughout the event and said, “You should do this once a month, just an outdoor event.’”

Oktoberfest will be held on Saturday, October 2 at Pour 64.  The festivities will run from 4:00 pm to 10:00 pm.  Kids are welcome, and patrons can bring their own chairs.  “We’re sad that we couldn’t do it last year, and I’m looking forward to having a lot of fun with a large group this year,” says Granger. “Hopefully they come out just like two years ago or even more.  We want to celebrate us being ‘back’ and being able to have these great events again.”  Prost!