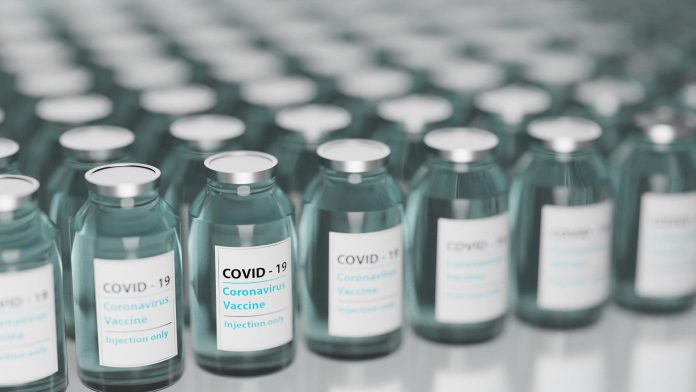 The first vaccines were delivered and administered on December 14. In North Carolina, these limited first doses were reserved for healthcare employees working directly with COVID-19 patients and residents and staff of long-term care facilities. At the beginning of January, North Carolina moved to Phase 1B, which opens vaccine distribution to anyone 75 years or older.

Mint Hill resident Joan Hauck received her first vaccine last week through a Novant Health Clinic in Matthews. For Hauck, the process of setting up an appointment and getting vaccinated was easy: she simply called her doctor’s office in Hemby Bridge, and within five minutes she was scheduled for both the initial shot and the booster to be administered 21 days later.

“It was very orderly,” says Hauck of her experience at the clinic. “The facility was very clean and organized,” continues Hauck, who received the Pfizer vaccine. “I know there’s been a lot of bad publicity about it, but it didn’t hurt me, and it didn’t make me sick. Honestly, I didn’t even feel the needle go in!”

Other septuagenarians have found the process of scheduling an appointment to be less straightforward. Indian Land resident Neil Fay lives just over the state border in South Carolina; located only minutes from Waxhaw, NC, he receives all of his medical treatment in North Carolina.

“When it all began, that’s what my concern was,” says Fay. “We go to a doctor in NC, but we live in SC. Where do I get the shot? I never really figured out what was going to happen, and then all of a sudden I got a letter from Atrium stating that I’m eligible.”

Currently a Tryon Medical patient, Fay isn’t sure whether he received the letter because he has received treatment at Atrium facilities in the past or because he has volunteered at Atrium. “I called our doctor and asked her about it, and she said they have no idea when doctors would be getting the vaccine,” says Fay. “She recommended I go ahead and register for the shot through Atrium.”

Fay scheduled the first available appointment, which was two weeks away. He’ll receive his first dose of the Pfizer vaccine on January 19 at a drive-through clinic at Atrium Health Union in Monroe, and he’s already scheduled for his second dose on February 9.

Others have had more trouble obtaining an appointment. Mint Hill resident Beth Riffe has been trying continually and unsuccessfully to set up an appointment for her 81-year-old mother through the Mecklenburg County Health Department, which is currently offering a public clinic uptown at the Bojangles Coliseum.

The process seems straightforward: according to The Charlotte Observer, “Anyone age 75 or up can sign up for a vaccination appointment at Bojangles Coliseum by calling (980) 314-9400 and selecting Option 3, or online at mecknc.gov/COVID-19 or https://booknow.appointment-plus.com/83g1hcpv/.” However, the county experienced technical issues with the phone number almost immediately due to high call volume, and Riffe has so far found the website to be glitchy and difficult to navigate.

“After you’ve created an account, you select a day, and it tells you the appointments for that day, but most of them are greyed out,” says Riffe. “For the past two days, I’ve gone and looked and there will be one appointment marked available, but as soon as you hit ‘Book It,’ it says ‘No longer available, please try again.’”

“It was just very confusing,” continues Riffe. “It’s not user-friendly, and it’s just plain not working. There’s no way my 81-year-old mother could have navigated it on her own.”

Charlotte resident John Barry experienced similar problems with the county’s public distribution program. After watching news coverage about vaccine distribution, Barry called a number he found in the paper to schedule his vaccine. “Of course you could never get through!” says Barry. “For all the population, one little number? Evidently, the thing crashed after a day or so.”

“I finally found the website, and I went there and registered, which is no big deal,” continues Barry. “After you do that, you click on another button that says ‘Register,’ and I said, ‘OK, here you go!’” Eager to schedule his vaccine as soon as possible, Barry was disappointed to see so much time greyed out. Finally, he found an available appointment. “I said, ‘OK, I’ve got it!’” says Barry. “But by the time I got around to finding the button saying this is the time I wanted and clicked it, somebody had already gotten it. This went on for quite some time.”

Barry was ultimately able to schedule through the county website by selecting a day a couple of weeks in the future. He’ll receive his first shot on January 21. Given the difficulties he encountered in scheduling the first vaccine, Barry is hopeful that he’ll be able to schedule the booster before he leaves the Coliseum.

Although he had some difficulties scheduling his appointment, Barry believes Mecklenburg County is doing a good job with vaccine distribution compared to what he’s seen on the news from across the state. “One of the counties around here had a hundred people in line; it was first-come, first-serve,” says Barry. “They had aerial pictures of the cars waiting to get in the parking lot in both directions. I’m sure some of them sat there all day and never got in. That threw me off wanting to do it at all. I do think the way Mecklenburg County is doing it with pre-registration is much simpler and easier and more controlled, especially with the limited amount of doses they have.”

Not everyone has had such a happy resolution. Unable to navigate the county website, Riffe registered her mother for Novant’s MyChart and was pleasantly surprised to receive a scheduling link only one day later. However, she was less pleased to see that the next available appointment in Matthews was March 26. After learning the next closest clinic was in Winston-Salem, she took it. “I’m just doing everything I can to protect her,” says Riffe of her mother who has only left the house a handful of times in the past ten months. “I want to keep her around as much as possible.”

Despite the confusion surrounding scheduling appointments, technical difficulties, and even longer waits, Barry, Riffe, and Fay all agree: it’s worth it. “I’ll be 77 in April,” says Barry. “I don’t want this disease. I love my grandchildren and children and my wife too much to get it. We’re both going to get it,” says Barry, referring to his wife, who will be eligible in Phase 2. “We’re tired of sitting home and doing nothing!”

“I’m not 21 years old and running around and doing all kinds of things,” says Fay. “I’m 81 years old. I’ve had a heart stent for a long time; I go to a doctor every six months, and once a year I go to a heart doctor, and they watch me very closely. I’m not in the best of health. I want to be able to go out and not be afraid of catching the virus.” Although he always intended to get the vaccine as soon as possible, Fay was further swayed by the numbers on the Pfizer vaccine and the recent news that they believe it will be effective against the new, more contagious strain of virus just beginning to circulate in the United States.

“It’s important that everybody do it,” says Hauck, who looks forward to traveling again. “I really feel like everybody should be doing it and not be afraid. There’s so much bad press, and it’s just wrong. I’m happy I did it, and I’ll be very happy to get the second one.”

Novant is currently scheduling appointments for patients age 75 and older. Eligible patients should receive a message through MyChart prompting them to schedule. Eligible patients without access to MyChart or who have not received communication can call (855) 648-2248.

Tryon Medical Partners does not currently have the COVID-19 vaccine and is awaiting approval from the North Carolina Department of Health and Human Services to be a Phase 2 distributor. Tryon Medical asks patients to refrain from calling to ask for status updates and rest assured they will keep patients informed of any updates.

Anyone 75 or older can visit https://booknow.appointment-plus.com/83g1hcpv/ or call (980) 314-9400 (Option 3) to book an appointment through the Mecklenburg County Health Department. Vaccines are administered uptown at the Bojangles Coliseum. Appointments are required; no walk-ins are accepted. Instructions regarding your second dose will be provided at your appointment for your first dose.