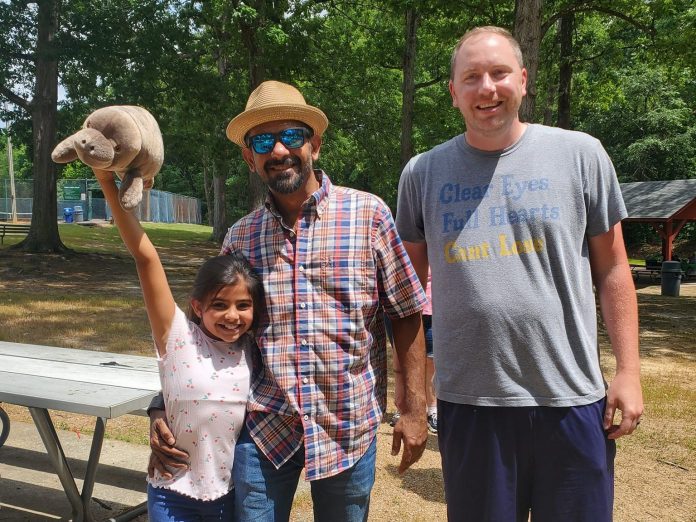 Nine-year-old Aliyah Ahmed, who currently attends Bain Elementary, put forth for consideration the “underrated” manatee.  She’d seen a picture of one on the internet, but she didn’t know much about them.  The more she learned, the more she was convinced they were the perfect mascot for her new school.  The manatee lends itself naturally to the schools selected colors, sky blue and silver.  It’s cuddly, peace-loving nature is the perfect “vibe” for an elementary school.  And what better to embody the idea of a “champion” than an animal facing the threat of extinction?

Aliyah was one of about 60 students to submit a choice for the school’s new mascot.  Nominees included everything from real animals like manatees and dolphins to mystical creatures like unicorns.  Those 60 were narrowed down to 10 in an online vote, and the ten finalists were then presented for a second round of voting.  Aliyah’s dad Kashif was her biggest cheerleader throughout this process, utilizing social media to encourage everyone to vote for Aliyah.

Aliyah was thrilled to make such an impact on her future school.  “It felt really good,” she said.  “I thought maybe that will be that mascot for a hundred years!  It made me really excited.”

For Aliyah’s dad, it was a proud moment to see his daughter accomplish her goal.  “It was awesome just to see her leave her legacy at such a young age,” he said.  “I grew up here in Matthews,” he adds, “and when Lebanon Road Elementary first opened up, I was the first class to go there.  They had a mascot challenge, adn Leo the Leopard was actually my idea.  It was really fun to see the same thing happening with my youngest daughter.  It’s a proud moment for all of us and more important just to see her face when she won.”