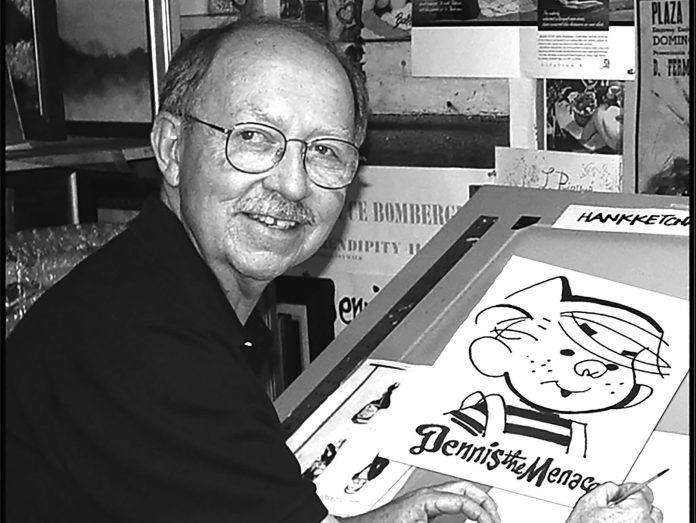 MINT HILL, NC – Marcus Hamilton’s long path to illustrating the mischievous titular character of Dennis the Menace ebbed to a place of undeniable clarity.  Marcus self-proclaims that he is much more like the character Joey who listens and follows along with Dennis’ plans.  Perhaps growing up as a quiet and obedient child allowed him moments of observation that others couldn’t afford.  And perhaps those moments of imagination and wonder laid the groundwork for what would become a handing off of not the proverbial baton, but ink and pencil by the creator of Dennis the Menace himself.

At 50 years of age, Marcus thought his career as an artist had come to an end due to the rise of computer graphics and digital art.  With a degree in Commercial Art from Atlantic Christian College, he found himself working at Wal-Mart with no prospects in the way of illustration.  However, directions shifted when he came across an interview of Hank Ketcham, the creator of Dennis the Menace.  In the interview, Ketchum mentioned that he would like to find an artist to take over and draw Dennis so that he could retire.  For Marcus, this interview was more than a legendary cartoonist promoting the 1993 film (starring Walter Matthau and Christopher Lloyd) based on his work.  It was an opportunity to draw a cartoon that he had long been inspired by.  Marcus’ longtime colleague Jim Scancarelli, the Gasoline Alley cartoonist, provided him with Ketcham’s phone number.

After speaking over the phone, Ketcham requested Marcus to mail samples of his magazine art.  Surprisingly, Ketcham liked the samples, and in October of 1993, he flew Marcus and his wife out to Monterey, CA.  During the visit, he showed Marcus how to improve his drawing style to reflect that of Dennis the Menace.  Even in his later years, Ketcham had been kind enough, upon their arrival, to help them with their luggage and reserve a room for the couple at a bed & breakfast.

But three specific instances told Marcus that he was heading down the right path.  The day before the flight, Marcus was walking through the parking lot of Office Depot after having bought art supplies.  Making sure that the paid amount was correct, he reviewed the receipt.  A shadow passed over the small piece of paper in his hand.  A monarch butterfly had fluttered over his shoulder and settled on a stop sign.  Then, while walking along the Monterae beach with Ketcham, a monarch butterfly passed by in front of them.  Later, when he returned to North Carolina, Marcus noticed a newspaper article in his house that had a picture of a kid wearing an outfit with a monarch butterfly imprinted on it, advertising Monarch Butterfly Week.  During that time of year, the aforementioned butterfly migrates from Canada to the Monterey Peninsula.  He took this as a message, and although he did not have to move to California, he would soon be spreading his own wings creatively in illustrating the daily black-and-white strips and taking over where Ketcham left off.

One of Marcus’ first memories of drawing was in church.  So that he would remain quiet during the sermon, his mother would give him a notebook and pencil for him to doodle with.  While his parents worked, he stayed at his grandparents’ house where there were comics and stacks of newspapers that he would sift through.  He cut out some of his favorite comic strips, including Prince Valiant and Li’l Abner.  He would also watch the Winky Dink and You television series where young viewers would be prompted to place a sheet of plastic paper across the screen and, for ten minutes, trace over a provided image like that of an animal.  On some days, he would hold a piece of paper against a window and, by the light of day, trace over an image of Mickey Mouse.  These small beginnings proved to foreshadow him drawing on a light table in his adult life.

Marcus continues the tradition of Dennis the Menace, and on Wednesday (December 9), Dennis will be staring right at Mint Hill’s Town Clock, curious as to who else measures days and nights by its time.  The gag is a funny one, so don’t miss it when it’s printed in over 800 newspapers worldwide.

In his artwork, Marcus makes sure to have fun with the drawing and story.  His mentor once told him this.  “Because if you’re not having fun,” Ketcham said, “the reader will know.”  So, he continues drawing and having fun.  Because of the signs.  Because of how right it feels.  Because he knows he was meant to do this.