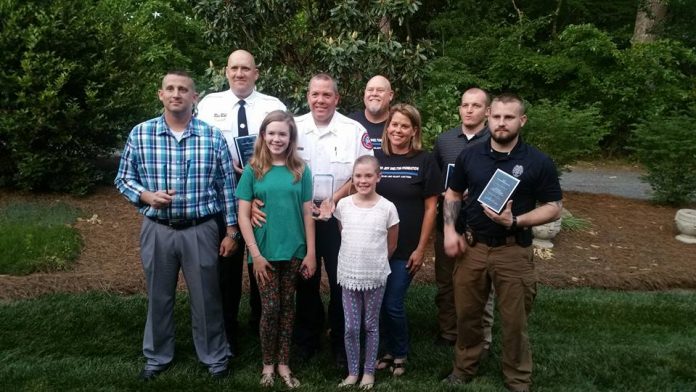 On May 11th, the Officer Jeff Shelton Foundation held its annual awards dinner and silent auction to honor Stanly County officers and raise money for the Officer Jeff Shelton Foundation. It has become an annual tradition in Stanly County to both honor those currently serving as well as honoring those who served that gave the ultimate sacrifice. As has also become an annual tradition, multiple Locust officers were nominated for awards with two of Locust’s finest coming away award winners.

On the nominee side for the Locust Police Department, Officers Trent Middlebrook and Dwayne Dietz were nominated as Stanly County Officer of the Year. Officer Dustin Wells was a finalist for the officer nominated “Got Your Six” award, and Officer Middlebrook, Officer Kevin O’Connor, Officer Brittany Tucker, and Detective Jeff Shew were finalists for the community nominated “Everyday Hero” award.

Coming away as award winners for Locust, Officer Dustin Wells was awarded the “Got Your Six” award after being nominated by Officer Hannah Claiborne for his swift response and timely action in assisting her with two suspects in a vehicle discovered to be stolen out of Charlotte. Due to week-long Intox Operator Certification training that Officer Wells is currently enrolled in, he was unable to be at the event. Locust Captain Steven Smith accepted the award on Officer Wells’ behalf.

Also, for the second straight year Officer Trent Middlebrook was named as Stanly County Officer of the Year. Officer Middlebrook again led the department in arrests, DWI arrests, and drug seizures as well as playing a vital role in the investigation and arrest of two Locust residents who were discovered to be selling drugs from their residences. Officer Middlebrook also achieved the status of instructor in Standardized Field Sobriety Testing, and is close to achieving the status as one of the few Drug Recognition Experts (DRE) in the region. Officer Middlebrook also completed his two-year Associate’s Degree in Criminal Justice in addition to his job duties.

Stanfield Chief of Police Corie Faggart was awarded the “Everyday Hero” award after being nominated by a member of the community. Albemarle Officer Josh Laws and Oakboro Captain Craig Richards were each awarded the “Heart of a Hero” award, a new award added this year. Officer Laws rescued a man from a burning house in 2016, and Captain Richards resuscitated an Oakboro Post Office employee after they had stopped breathing while at work.

Honoring those who have served that we have lost on what is the 10th anniversary of Officer Jeff Shelton being killed in the line of duty, Stanly County Sheriff’s Detective Jamie Shue was honored posthumously with the Outstanding Career Service award. Detective Shue passed away in March after battling non-alcoholic cirrhosis of the liver. His family was in attendance to accept the award in his honor.

The Officer Jeff Shelton Foundation was started by Officer Shelton’s widow Jennifer to honor Officer Shelton’s memory and create a scholarship in his name for criminal justice students. Officer Jeff Shelton was a Locust resident and Charlotte-Mecklenburg Police Department Officer who along with his partner Officer Sean Clarke was ambushed, shot and killed in the line of duty in 2007 during a domestic disturbance call.