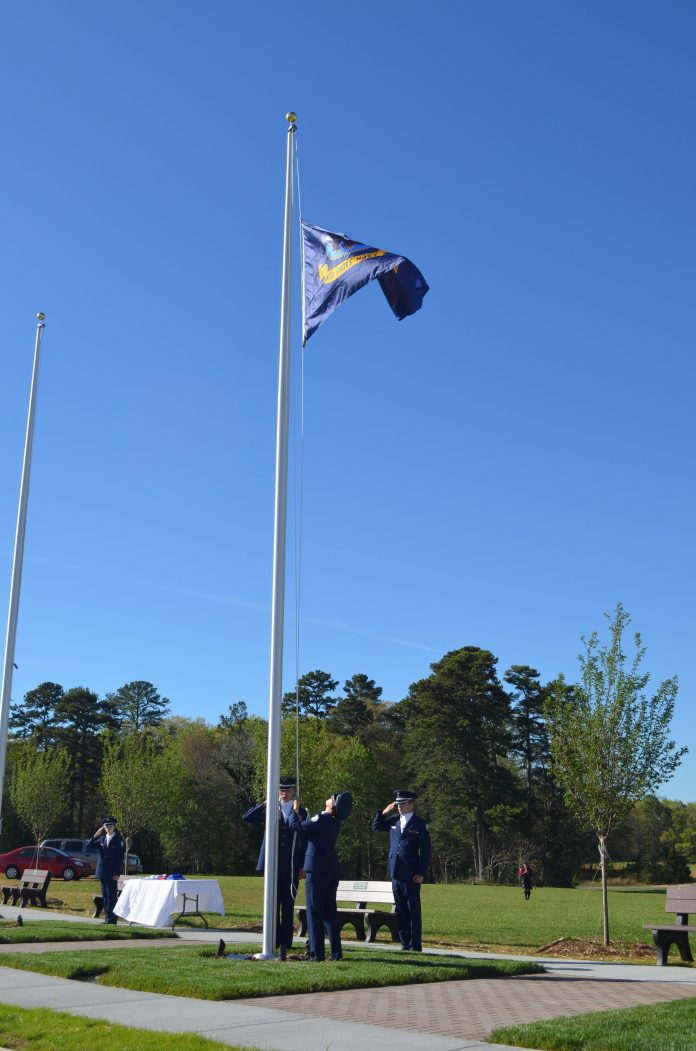 Saturday afternoon, the City of Locust held a service to dedicate the new Veterans Memorial. The memorial is located in the Locust Town Center to the left of city hall and is designed to honor veterans, retirees, active duty and reserves from the five branches of the military.

Coordinated by Planning and Zoning Director Scott Efird, planning and fund raising for the Veterans Memorial began three and a half years ago.

“This memorial has been in the works for a number of years,” said Mayor Pro Tem David Walker as he welcomed attendees to the service. “It’s taken a lot of work, a lot of time and a lot of effort by many, many people to get us to this day.”

During the dedication service, attendees participated in the recitation of the Pledge of Allegiance and singing of the National Anthem. Special music was provided by the Singing Americans choir and several bagpipe melodies were performed by David Thornburg.

The Veterans Memorial features five flagpoles to display the flags of the Air Force, Army, Coast Guard, Marine Corps, and Navy. The West Stanly ROTC raised the flags representing each of the five branches of the military.

Planning and Zoning Director Scott Efird and Parks and Recreation Director Tate Osborne each spoke briefly thanking veterans for their service as well as thanking those individuals and businesses who helped to make the Veterans Memorial possible.

“I was thinking today of what I wanted to say and I kept coming back to two words: thank you. We wouldn’t be standing here today if it wasn’t for the men and women who raised their right hand and took that oath [Oath of Enlistment],” said Efird.

Efird and Osborne then unveiled a monument dedicated to Prisoners of War (POW) and those Missing in Action (MIA). The unveiling of the POW-MIA monument was followed by a rifle salute performed by the American Legion Post 433 Honor Guard and “Taps” played by Mike Benefield.

Mayor Pro Tem Walker concluded the service, again thanking veterans for their service to our country. “It is an honor and a privilege to live in a free country protected by those who were willing to put our country and our interests ahead of their own,” he said.

The Veterans Memorial Dedication Service was held in conjunction with the annual Experience Locust event and the summer concert series kickoff. The afternoon featured vendors, food, games and giveaways during Experience Locust. The fun continued into the evening as the Mason Lovette Band kicked off the summer concert series. A free bounce house for the kids added to the fun.

Summer concerts are held monthly from April through September. Concert dates for 2017 are as follows: May 20, A Deeper Shade of Blue; June 17, Island Time Band; July 15, Arts Fishing Club; August 19, Silk Groove; September 16, Fantastic Shakers. The September concert finale will be followed by a fireworks show.