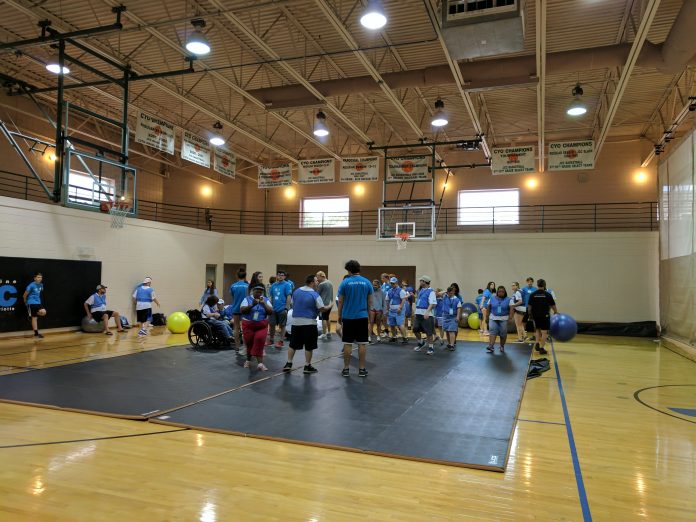 If you visited the Levine Jewish Community Center last week, you may have been hard-pressed to find a parking space.

The JCC’s lots were filled to capacity with the vehicles of Camp SOAR’s dedicated volunteers.

Camp SOAR (Special Olympic Athlete Retreat) is a week-long camp for individuals with disabilities. The camp is split into two sessions: a 2-day session for 12 to 25-year-olds, and a 2-day session for individuals 26 and older. “A lot of people think kids,” says longtime Camp SOAR volunteer Al Tinson. “They think ‘Special Olympics,’ they think kids. Well, we have them 50- 60- 70- 80-years old!” The final day of camp is a celebration for all ages featuring sports activities as well as a magic show, pizza party and dance.

Now in its seventeenth year, Camp SOAR drew campers from all over Mecklenburg County and the surrounding areas to the JCC. The camp offers many of the sports you might associate with the Special Olympics, like swimming, soccer, basketball, tennis bowling and bocce. However, particularly for the adult campers, they also offer dance and fitness programs like zumba, yoga, and aerobics as well as music therapy, therapy dogs, arts and crafts, and computer activities.

“We’re trying to do things that get them engaged,” says Bob Bowler, founder of Camp SOAR, who worries about the older campers developing health problems like obesity, diabetes and high blood pressure. “So many of them get sedentary. They can only work a certain number of hours; some of them don’t have jobs at all.”

Camp SOAR wouldn’t exist without Bob Bowler, who Tinson terms “Mr. Camp SOAR.” When I asked Bowler if he had a few minutes to speak with me, he enthusiastically replied, “You got all day? I’m so passionate about it I could go all day!”

Eighteen years ago, Bowler saw the need for a camp for individuals with disabilities. Having been involved with the Special Olympics already for a number of years, Bowler recalls hearing the athletes say again and again, “I wish I could go to a camp.” Bowler heard horror stories from those who attended traditional sports camps with their typically-abled peers of bullying and counselors unprepared to handle their needs. The therapeutic camps offered by Parks and Recreation had strict caps on enrollment, which severely limited their availability. “They see their brothers and sisters going to different camps, and they want to have a camp,” says Sue Rebich, who coordinates volunteers for Camp SOAR.

“Somehow, I’ve got to figure out how to do a camp,” said Bowler. He called up the executive director of the JCC and offered to buy him lunch. Bowler smiles and laughs as he remembers his sales pitch: “Well, let me put it this way. I’ve got a lot of dreams, a lot of hopes, a lot of visions – no money. I want to start a special needs day camp for the special needs community. There’s not one for them, and I’m hoping that you guys can help me.”

The JCC’s leadership told Bowler that if he would run the camp, he could use the JCC for free. It began as a 3-day camp run by 35 volunteers for 54 campers. Every year since, the camp has grown and expanded. This year, the JCC hosted over 300 campers and 400 volunteers.

Though it has often been suggested that Bowler cap the camp, he can’t bring himself to turn anyone away. “I never say no to anybody,” says Bowler. “They say ‘Well, you might want to cap the numbers,’ and I say, ‘No, I can’t do that.’” Fortunately, the JCC has expanded in step with Camp SOAR, more than doubling in size since the camp began. “None of this would have been possible if this place didn’t double or triple in size,” says Tinson as he looks over the camp today.

Perhaps even more remarkably, all campers attend Camp SOAR completely free of charge. Though Bowler runs Camp SOAR under the umbrella of the Special Olympics, they don’t provide him with a staff or a budget. “They pay nothing to come,” marvels JCC Sports Director Stephanie Garner, “which amazes me to this day because this population usually has to pay a lot of money for programs like this.”

Garner is also amazed by the way the camp brings the community together. “When we first started this, I remember Bob talking to Barry, and I think one of the reasons that her predecessor said he liked this marriage was that they were looking to become to Levine Jewish Community Center,” says Tinson, who adds that you don’t have to be Jewish to use the facility. “They wanted to get the word out that we’re a community center; we’re here for the community.”

“It takes a village to do this,” says Bowler. “I couldn’t do it alone.” Camp SOAR is built on the buddy system. Each and every camper has a buddy who helps to motivate and encourage the campers. In large part, these buddies come from Charlotte Catholic High School, who also partners with Camp SOAR.

Bowler is fond of promising his volunteers that they’ll get more out of Camp SOAR than the campers. “It give them an opportunity,” says Bowler. “It teaches them about life and about breaking down misperceptions.” Many volunteers return year after year, and some are even inspired to pursue careers in special education, occupational therapy, recreational therapy or social work. “The exposure is here,” says Bowler, “and a lot of them come and say, ‘I want to be a teacher,’ and they fall in love with our population.”

One such Camp SOAR success story is Sara Schuler, who began volunteering with Camp SOAR as a high school sophomore in 2010. “I always knew I wanted to be a teacher,” says Schuler, “but going to Charlotte Catholic, we never had special ed programs when I was there, so I was never around this population. Camp SOAR was really my first experience working closely with people with disabilities, and it really just opened lots of doors for me to learn about it and realize I really enjoy this.”

Schuler majored in Special Education at Appalachian State University and now teaches in a Middle School behavior support classroom in Raleigh, but she still returns to Charlotte every summer for Camp SOAR. “I just love how the campers get excited over the little things,” says Schuler. “Something as simple as making a basket or getting the tennis ball over the net. And I also just like seeing volunteers or people that maybe wouldn’t normally interact with people with disabilities learning and growing as people too, and learning how to interact with people who may not be the same as you. I think that’s huge.”

Mint Hill resident Andy Tinson is another long-time Camp SOAR volunteer. Tinson recalls being involved with Camp SOAR “basically from the beginning” when he would tag along with his dad, Al. For more than eight years now, Tinson has coordinated all the healthy, safety and medical aspects of the camp. “It’s such a great community that’s come together over the years and built this great program,” says Tinson. “It’s just a lot of fun to be a part of seeing all the campers have a great time”

Having medical support staff volunteers at Camp SOAR is crucial to making the camp run smoothly. “This population – they have a hard time with noise, exhaustion, heat, seizures,” says Mint Hill resident and triage nurse Carol Morris, who is in her fourth year with Camp SOAR. “We’ve just got to make sure to give out the medications on time, make sure everyone is OK, observe everything.”

It’s impossible not to get caught up in the excitement as you walk around the JCC talking to Camp SOAR’s passionate volunteers. “The campers themselves, I love them. They’re so warm and so loving, and they appreciate everything. Even if you give them a drink of water or say, ‘How’s your day going?’” says Morris. “You could never pay me to do this.” “It’s my favorite, favorite program,” says Garner. “I tell people that all the time. I do all kinds of programming but Camp SOAR is my favorite.”

Perhaps Bowler sums it up best, reflecting on the past seventeen years running Camp SOAR: “It’s just a dream come true,” he says, “to see the fun and the excitement and the job and how it builds their self-esteem and confidence.”