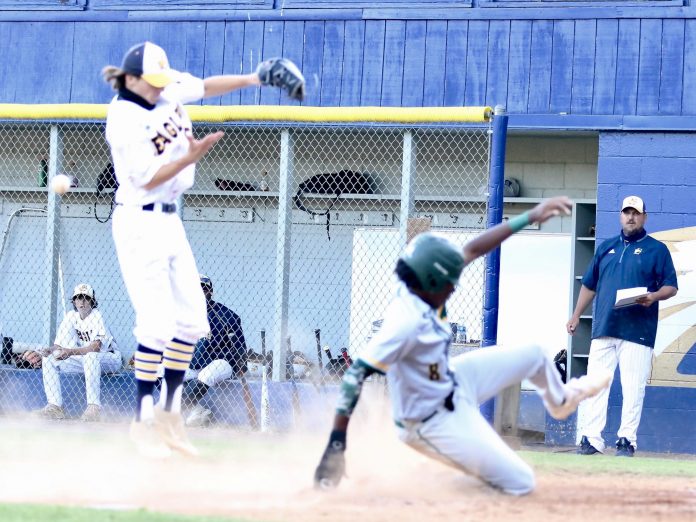 Luke Chantry was first up for the Patriots and singled to left field and worked his to third on a passed ball and a wild pitch. Chantry scored on a ground ball deep in the gap to the shortstop.  Indy’s designated hitter Brandon Moser drew a walk then scored and on PJ Chiles’ single to left to give Indy a 2-0 lead heading into the bottom of the first inning.

East Meck answered with two runs on two hits and a walk to tie the score 2-2 after one full inning.  However, in the bottom of the second inning, the Eagles took the lead 3-2.

Patriots’ Taylor Moser led off the top of the third and was awarded first base after being hit by a pitch.  After stealing second and advancing to third on a Garrett Lawrence single, Moser came home on a passed ball to tie the score.

The Patriots had a break-out inning in the top of the fourth scoring five runs on four hits.  Luke Chantry started the inning with a single to left field. Wilson Lohrer scored Chantry with a triple to the left-field wall.  Brandon Moser stepped in the batters’ box and singled to left scoring Lohrer.  Tyler Spicer came in as a courtesy runner for Moser and scored on a double by Jake Stanley.  PJ Chiles was awarded first base after being hit by a pitch.  And Indy took an 8-4 lead and never trailed again.

After giving up one run in the bottom of the fourth, the Patriots added four more runs in the top of the fifth.  Luke Chantry led off with a double to center field.  Wilson Lohrer singled to left field scoring Chantry.  For the second time this year, Brandon Moser came to the plate and hit a shot over the left-field wall for a two-run home run.  Brandon was followed by his brother Taylor Moser who blasted a home run over the right-field wall to make the score 12-5.

In the top of the sixth inning, Indy added four more runs.  Joe Minaya led off with a walk and scored on a Tyler Spicer double to the center-field wall.  Luke Chantry hit a long sacrifice fly to the left to drive in Spicer.  Wilson Lohrer followed with a triple to center field.  Brandon Moser was awarded first base after being hit by a pitch.  Carson Gesing followed by a single to left field and picked up an RBI.  Taylor Moser, Indy’s last hitter, reached after the Eagles were unable to turn the double play,  The Patriots led 16-6 going into the bottom of the sixth.

In the bottom of the sixth, East Meck started a comeback.  The Eagles scored 4 runs in the sixth and added 3 more in the seventh to make the final score 16-12.  The win gives Indy a 3-1 record.