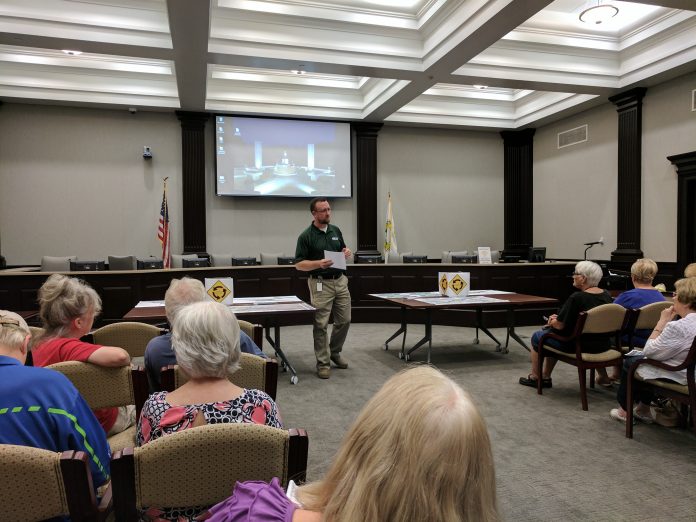 Construction of the roundabout at the intersection of Idlewild and 51 has been a hot topic this summer. Amidst road closures, delays in construction and reduced traffic for business located in the vicinity of the roundabout, many Mint Hill residents have questioned the wisdom of the project. But arguing about construction wasn’t on the agenda Tuesday night. “We are trying to educate people on how to navigate a roundabout,” said Frey. “The roundabout is under construction, so arguing to merits of whether we should build it or not – that’s not exactly a fruitful conversation at this point. We all need to make peace with it and figure out how to drive in it

Though roundabouts, also known as traffic circles, are common in the northeastern United States, the configuration may be new to many Mint Hill residents. Frey’s presentation focused on educating residents on how to navigate a roundabout safely and properly as well as addressing concerns about the new traffic pattern.

Although many may be unfamiliar with their benefits, roundabouts have been statistically proven to improve road safety, traffic flow and even air quality. Compared to a traditional four-way stoplight, roundabouts see a 39% decrease in crashes including 89% fewer fatal crashes and 74% fewer crashes resulting in life-altering injuries.

The roundabout currently under construction at the intersection of Idlewild Road and 51 connects two 45 mph roads. A crash at that speed could be fatal. Roundabouts are made to be traversed at a maximum speed of 25 mph, and their design drastically reduces the likelihood of head on and t-bone crashes. This means that roundabouts both decrease the likelihood of traffic accidents and, in large part, limit them to fender benders.

Another main benefit of a roundabout is improved traffic flow. On average, cars wait about 120 seconds at a stoplight. By eliminating this built-in delay, roundabouts decrease wait time by 2.5 times when compared to a stoplight. The improved flow of a roundabout and increased vehicle capacity work together to allow more cars through and lessen overall delays at an intersection.

Some of those present questioned if the Idlewild/51 roundabout would really improve the traffic situation at this busy intersection, particularly for those entering the roundabout from Idlewild at rush hour. John and Marilyn admitted that the intersection is a problem but weren’t convinced that the roundabout would fix it. “I really think the traffic’s too heavy,” said John, who admits he sometimes waits half an hour on 51 traveling home to Mint Hill from Matthews at the end of the day. “I’ll have to see it to believe it,” added Marilyn.

Though Frey admitted that motorists may still see some delays at peak hours, he was confident that the roundabout would improve rush hour traffic and virtually eliminate the random backups residents see throughout the day at the stoplight.

“They do work, they cycle the vehicles through,” said Frey, who cautioned motorists against imagining lines of cars backed up to enter the roundabout the way they backed up at the stoplight. “I think we are creating an entirely new intersection. It’s going to be entirely different than we know now.”

One added benefit of a roundabout that many people might overlook it its beneficial effect on the environment. Idling vehicles stopped at a light pump raw exhaust into the air, making them one of the top air pollutants. By reducing idle time, roundabouts are estimated to create 30% less pollution than stoplights.

After reviewing the benefits of roundabouts and the details about their construction, Frey summed up the general principles for navigating a roundabout.

After the presentation, Frey invited audience members to the front to examine diagrams of both roundabouts and even helped individuals figure out exactly how to enter and exit the roundabout to get to their specific destinations. Charlotte resident Jane, who travels down Idlewild Road and across 51 to visit her daughter, was grateful for Frey’s help, but still a bit unsure. “He showed me to get in the left lane and go straight across,” said Jane. “I won’t feel comfortable until I do it,” she added. “I feel better about it.”

The Idlewild Road/51 roundabout is scheduled to open August 28. Expect to see an increased police presence in the area during its first days of use to ensure safe motoring. “If I had to sum up this meeting in one sentence,” said Frey, “it would be, ‘SLOW DOWN!” To learn more about roundabouts, consider viewing the youtube video “Navigating a Multi-Lane Roundabout:” https://youtu.be/CEhNboz5GPk