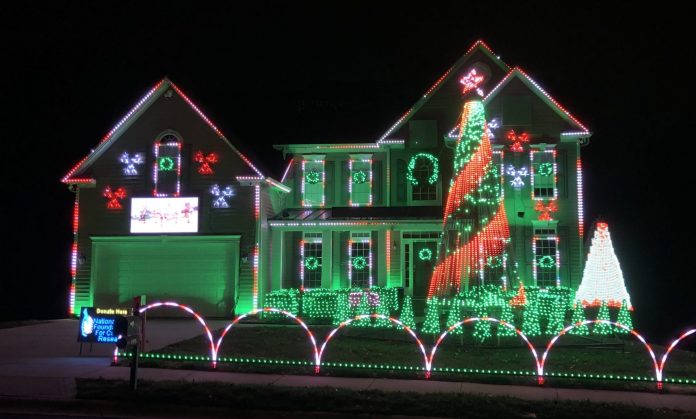 If you didn’t catch the Garden Oak Holiday Lights this year, you missed out.

December 22 capped off eight years of Garden Oak’s display featuring over sixty-five thousand dancing and morphing lights synchronized to popular music.  Although Pete and Sherri Kimbell pride themselves on rarely repeating a song, this year’s show was a “Best Of” paying homage to favorites from the past seven years of light shows.  In fact, they had so many favorites from years past that they couldn’t settle on their typical six songs, so this year featured two separate shows on alternating nights highlighting their twelve favorites from years past.

Unfortunately, December 22 was not only the final night of the season but the last light show that will take place at the Kimbells’ home.

There’s a simple reason why The Kimbells are turning off their lights after this season: traffic.  Over 12,000 people visited the display in 2019 alone. Garden Oak may be an amazing show, but it’s an average home in an average housing development in Indian Trail.  “For the amount of traffic we get, we have to have people controlling the traffic,” explains Kimbell. “We basically turn our street into a one way street, so it is our responsibility to get everyone to and from safely.  Our neighbors still come and go. It’s is a blind curve; you can’t see the end of the street, and there are a couple of hills involved, so we have to radio if the road is clear for a neighbor to come through.”

Local police, the town of Indian Trail and Kimbells’ neighbors have been more than supportive, but managing that much traffic – which can require up to a dozen volunteers on peak nights – has become an insurmountable challenge.  “It was a hard decision because we know we have a huge fan following,” says Kimbell, who notes that many cars drove by looking for the lights on the 23rd, 24th and 25th. “We feel bad that we’ve maybe let some people down for the holidays, but we just couldn’t do it safely.”

However, this doesn’t have to be the end for Garden Oak Lights.  In 2017, they announced a plan to move their display to a new location at Wise Acres Organic Farm.  The new concept is ambitious: a 20,000 foot “Town Square” with 1.6 million lights – nearly triple the amount on display at the Kimbells’ home this year.

“The lights will be displayed on a ring of thirteen old-time store fronts with large display windows depicting Christmas-themed scenes that people can look in on and admire,” says Kimbell.  “Think large department store display windows, not actual stores to enter – Hollywood sets. The main attraction will be Santa’s workshop that will tower up to 50 feet above the square’s store fronts.  Multiple times a night, our synchronized light to music display will bring the castle and square to life to dazzle all as people watch from inside the square.”

Town Square won’t just be another Speedway Christmas or McAdenville.  The display will be interactive; visitors will be able to walk around and interact with the old-time store fronts modeled after large department stores.  “We want to make it an immersive situation,” says Kimbell. “We’re hoping it will be a completely different experience than what anyone’s had for the holidays.”

There’s just one obstacle standing in the way of this display, and it’s a big one: money.  After 24 months of working diligently to collect donations, Kimbell is stalled at only 11% of the funds and materials required to build the display.  The building process is expected to take 19 months, so seeing Town Square built for 2020 is out of the question at this point, and 2021 is quickly becoming a challenge unless Kimbell can establish some corporate sponsorships in the first quarter of this year.

“We’re looking for corporate sponsors that want to team up with us to make this new venue happen,” says Kimbell.  “We will take all contributions offered to us, but we really feel that to make our goal, corporate sponsors are needed.  We are talking with a couple of companies that we have reached out to previously just before the holidays late this summer and those conversations are looking promising, but it’s not going to put us over the finish line.”

It’s important to the Kimbells that the new display at Wise Acres continues to be free to the public, and that any money collected go to a charitable cause.  When the Kimbells first turned on their lights in 2012, they were unsure what organization they would accept donations for, or if they would even collect money at all.  “In September 2012, the decision was made for us,” says Kimbell. “I was given news that a member of my family had been diagnosed with pancreatic cancer. This type of cancer is not survivable; it is the most aggressive, causes more than 1% of all deaths in the US, and is one of the least funded of the major cancers.”

Since then, Kimbell has collected donations to help fund the National Foundation for Cancer Research.  Over the last eight seasons, the Kimbells have raised over 32k, 100% of which went directly to the National Foundation for Cancer Research.  “Up to this point, my wife and I have paid for 100% of the display by putting off buying new cars, vacations and other small things. We have felt that this cause has a greater importance to us,” says Kimbell.  “We would like to continue having 100% of the donations going to the organization we raise funds for.”

Over eight years of light shows, the Kimbells have welcomed 11,379 cars carrying 38,438 people to see their light display.  Help the tradition continue by making a monetary contribution at donate.goholidaylights.com today. If you own a corporation that is interested in partnering with the Kimbells to provide materials or funds, contact Pete at pete.kimbell@goholidaylights.com.  All donations are tax-deductible.

“We’ve got to get the word out, that’s the biggest thing,” says Kimbell.  “We’re ready to go. We have a lot of enthusiasm to get this project going and keep it rolling so we don’t skip too many years.  Everybody is ready to go. We just need to get that money in or that material donated to make this happen.” 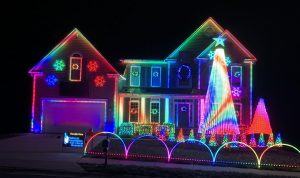