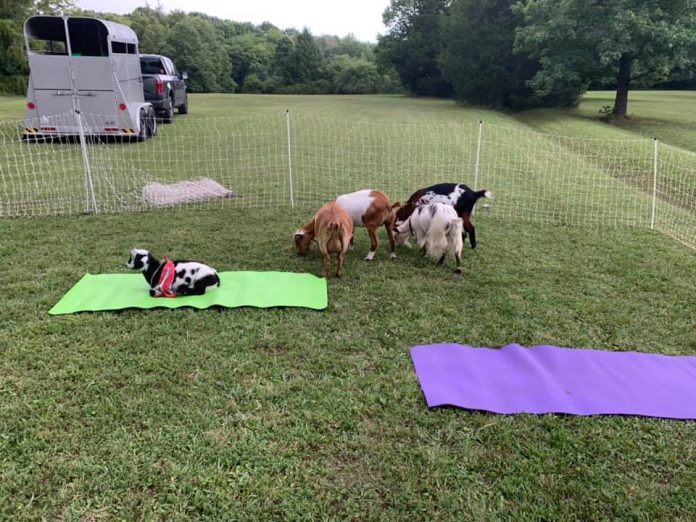 Motorists driving down Brief Road on the evening of Friday, July 12, saw an unexpected sign on the side of the road: “Goat Yoga Park Here!”

The event was put on by Terri Gustin, owner of Rock Hill-based Critter Creek Farm.  A retired nurse and full-time flower farmer, Gustin has been raising goats for years.  She began offering goat yoga when her children went to college, leaving no one at home to play with the goats.  “As a breeder, I want to sell really well-socialized goats, but they don’t just come out that way,” says Gustin.  “The goats love it.”

Described by goatyoga.net as “the smile-inducing fitness trend sweeping the nation since 2016,” goat yoga is simply standard yoga practiced in the presence of and in tandem with goats.  One of the first farms on the East Coast to offer it, Critter Creek began offering Goat Yoga three and a half years ago in partnership with Cat Paw Winery.

When Gustin found that her customers were more interested in goats and yoga than wine tasting, she moved her classes to the Historic White Home in downtown Rock Hill.  Critter Creek Farm now regularly offers Goat Yoga in the gardens of the Historic White Home, a location that offers not only beautiful gardens but also plenty of shade, ample parking and bathrooms, and a short walk to downtown Rock Hill.

Gustin’s classes, taught by instructor Tammy Calvin, involve an hour of beginner-level yoga.  “While you’re doing yoga, the goats are just meandering around,” says Gustin. “When you’re down on your mat, they’ll often just come up and give you a kiss or just stand there waiting to be pet!  Others will just crawl up on your mat and go to sleep.”

About halfway through the class, Gustin scatters grain on everyone’s mat.  “Not that you need it to socialize with goats,” adds Gustin quickly, joking that some people seem to come to class with goat pheromones, “but they do need to move on from their ‘favorites.’”

After class, Gustin provides plenty of time for everyone to socialize and take pictures with the goats.  “After yoga is really the fun part, to be honest, because then we kind of just play with the goats,” says Gustin.  “Everyone looks forward to that. Several of them are trained to pose on your back.”

Gustin thinks goat yoga provides a great entry point for people who have never done yoga before and are a bit intimidated by the practice.  “It takes the pressure off doing yoga when you know no one’s paying attention to you,” she says, estimating that about half the people who attend her Goat Yoga classes have never done yoga before.  “Lots of people are willing to try in this setting.”

In the end, yoga isn’t even required.  Calvin starts every class saying yoga is secondary to the goats.  “If you want to grab a baby and sit on a mat and snuggle, you can do that,” says Gustin.   “This is yoga practice, not yoga perfect,” she adds, echoing Calvin, “so we do it at your pace.”

In addition to offering regular classes in Rock Hill, Gustin and her goats also travel for private events.  The July 12 event was hosted by Holly Bennett, owner of Indian Trail’s Farmhouse-Chic and The Rage Room, which offers an equally unique yoga class coupled with an opportunity to “rage.”  After attending a few of Gustin’s Goat Yoga classes in Rock Hill, Bennett asked if she would be interested in hosting a private event at her friend’s farm in Mint Hill.

Private events can be tricky, and unfortunately, Friday’s event in Mint Hill was preempted by pop-up thunderstorms.  Those who arrived early were able to spend a little time with the goats and attempt some yoga before rain started pouring down at 6:30, necessitating cancelling the event for the goats’ and people’s safety.

Goat Yoga has become an immensely popular trend.  The July 12 event, like most of Gustin’s events, sold out a week prior.  “I’m not sure that it’s exactly the goat yoga,” says Gustin when asked why so many people are eager to do yoga with goats.  “I think folks these days are all about experiences. Why do we go to a brewery where we can bring our dog? Why do we try new things?  I think that’s just the trend now, experiencing fun new things and experiencing life.”

“I went to try something new with good friends,” says Kathi Kraft, who attempted to do yoga in the rain for ten minutes before it was called off. Kraft attended with a group of friends from Burn Boot Camp Matthews, who partook in the event as part of an organized night out.  “It was going to be my first attempt at yoga. I liked the idea of an outdoor yoga session and, of course, I wanted to play with the goats!”

Critter Creek Farm offers Goat Yoga regularly at the Historic White Home in Rock Hill, SC.  To view their calendar of offerings or learn more about booking a private event, visit their web site at www.crittercreekfarm.com.