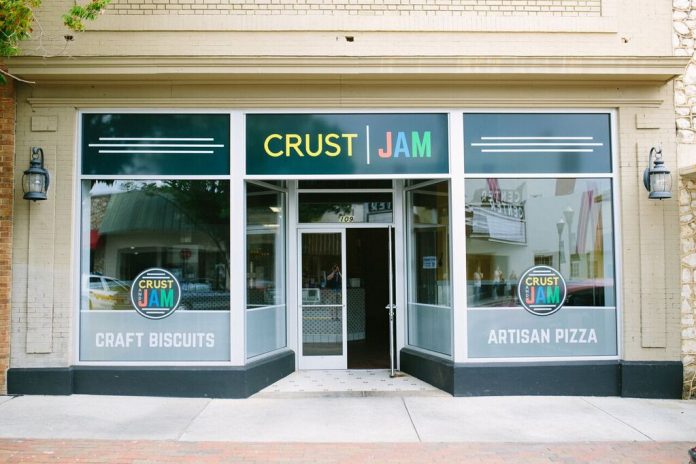 A truly unique eatery opened on May 12th at 109 South Main Street in Monroe. Crust & Jam, featuring cuisine from Chef Donnie Simmons opened its doors to a crowd of folks just waiting for a delicious slice of pizza.

The concept for Crust & Jam is one of a kind. The “Crust” is served for lunch and dinner – specialty pizzas with ingredients as inventive as their names. The Southern Hospitality pizza has the restaurant’s signature tomato jam as its base and is topped with country ham, goat cheese, basil, and pickled red onion. The Asian Persuasion pizza has a sweet soy as its base and is paired with Asian chicken, pineapple, and mozzarella.

Customers can create their own pizza with over two dozen toppings to choose from. In addition to the usual suspects (pepperoni, mushrooms, and onions), Chef Donnie offers jalapeno bacon, country ham, chorizo, salami, and figs among others. Savory appetizers, salads, and subs round out the menu, and customers with gluten sensitivity can elect to have gluten-free pizza or Stromboli.

The “Jam” served at breakfast is sure to please a variety of palates with tomato jam, fig jam, honey, and chow-chow spread on fluffy biscuits made from scratch. Chef Donnie also makes various jams throughout the week.

For those who want a hardier fare, Chef Donnie’s chorizo (a spicy pork sausage) or jalapeno bacon is sure to kick-start the day. Customers can fill their biscuits with four different kinds of cheese, chicken, eggs, or a variety of fruits and vegetables as their tastes direct. Again, a gluten-free biscuit is available as well as Carolina pimento cheese stone ground grits.

Chef Donnie started out in the biz in 1996 at Eddie’s Place, Danny’s Too on Providence Road in Charlotte. His work ranged all over including an appearance on “Diners, Drive ins and Dives” with his hot lap sandwich. “It was the most watched episode, but not because of me,” Chef Donnie jokes. “Clint Bowyer was also on the show.”

Eventually, Chef Donnie’s path led him into the entertainment arena where he served as chef to several A-list stars. “I was in the right place at the right time,” he says. He was able to flex his culinary muscles on tour with some of the most famous musicians of our time. While Chef Donnie was ultimately in charge of the menu, some of his clients had strict dietary preferences allowing him to perfect vegetarian and vegan dishes.  The 38-year-old husband and father said that the long days of cooking on tour can take its toll. “It was a lot of hard work,” Chef Donnie explains.

With his latest venture, Crust & Jam, Chef Donnie finally gets to create a unique dining experience. “I didn’t just want to be a chef. I wanted to be the culinary designer,” he says. “And I want to put Monroe on the culinary map.”

Chef Donnie believes that people deserve a second chance. He himself suffered a stroke a few years ago and had to teach himself to cook all over again. After his rehabilitation, he realized that part of his calling was to help those who were trying to do their best but were being discounted by society.

Jake, a server at Crust & Jam, is one of the success stories that Chef Donnie tells. Jake is attentive to the customers and is always ready to give a recommendation from the menu. Chef Donnie acts as Jake’s caregiver while he works there, and Chef Donnie hopes that Crust & Jam will be able to help many others, one person at a time.

Crust & Jam strives to get foods grown or raised in the Carolinas. The ham comes from Boone and the chorizo is also from North Carolina. “And, of course, we use Duke’s mayonnaise,” Chef Donnie says. “I try to get as much as I can from Carolina-sourced ingredients.”

Chef Donnie is partnering with two other gentlemen to make Crust & Jam the first of four unique restaurant concepts that are projected for Monroe. In addition to the pizza and biscuits theme, Chef Donnie hopes to open a fine dining experience featuring authentic Southern cooking, a tapas and wine bar, and a family-style restaurant packed with Southern hospitality.

Hunter Henrickson, assistant operations director, keeps things going in the day-to-day operations. A management information systems major at UNCC, Henrickson says Crust & Jam values community involvement and giving back. “We trained our team to make pizzas before we opened. We must have given out 150 pizzas to local businesses while we were practicing,” he says.

“We are improving something every day from wait times to finding more unique items to include on the menu, to more catering events, to servicing the community even more,” Chef Donnie says. “We strive to perfect our processes to ensure we always deliver a quality product that incorporates the values of the Monroe community.”