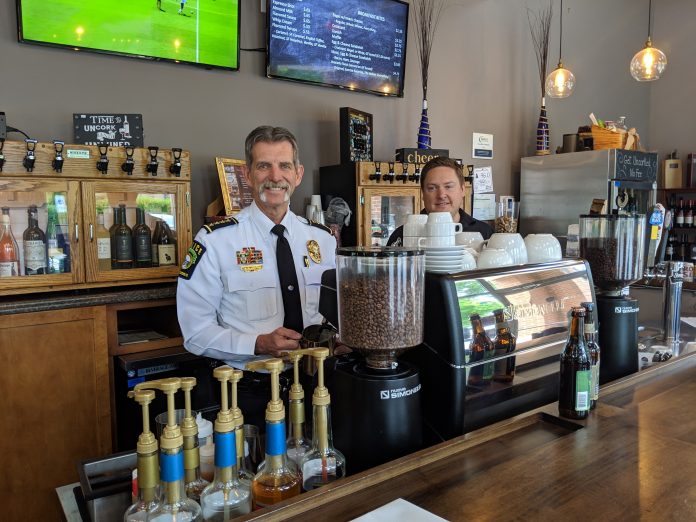 On Saturday, May 4, customers who stopped at Vintner’s Hill in the morning were treated to a special guest barista brewing their coffee: Mint Hill’s Chief of Police Tim Ledford!

From 8:00 to 10:00 a.m., Ledford served up coffee and espresso to raise funds and awareness for the Mint Hill Police Explorers Program.

“Police Explorers are school-aged children ages 14 to 21,” says Ledford.  “They’re looking for a career choice. Most kids 14-years-old, they don’t know what they want to do when they get out of school.  We give them an opportunity to come by the police department and do some training. We do crime scene investigations, traffic stops, court procedures, photography – we try to let them know exactly what it’s like to be a police officer.”

Police Explorers not only helps young people to understand what a day in the life of a police officer is like.  It also educates young adults on the purposes, mission and objectives of law enforcement. The program challenges young adults to consider a career in law enforcement as well as to become responsible citizens.

An avid coffee drinker himself, Ledford claims to drink up to eight cups of coffee in a morning!  “Me and some of the other officers drop by here on a regular basis for a coffee first thing in the morning before we get started,” says Ledford.  Despite his affinity for coffee-drinking, being the man behind the counter was new to Ledford, but he caught on quickly and was soon making white chocolate mochas like an experienced barista.

“As a result of the kindness and generosity from the community, we will be providing $400 in donations to the Police Explorer Program,” announced Vintner’s Hill owner Chris Coy on Facebook.  The grand total included $160 of donations from generous customers. Vintner’s Hill donated an additional $240 in coffee sales earned during the two-hour event.

Ledford’s stint as a barista is what Coy hopes will be the first in a series of “Guest Baristas” at Vintner’s Hill.  Keep up with Vintner’s Hill’s social media and e-newsletter to find out who the next guest barista will be!