CHARLOTTE – December is the darkest month of the year. First, we have the earliest sunset at the beginning of December; then, on December 21st, there is Winter Solstice, the day with the fewest minutes of daylight. As we journey through the darkest days of the year, we are drawn to the light: holiday lights line the streets of many towns, and we light candles and gather around the warmth and light of the fireplace. There are three mainstream holidays in December celebrating the light that leads us out of darkness: Christmas, Hanukah, and Kwanzaa. Each holiday celebrates the beauty of light in unique ways.

In the Christian faith, Christmas marks the historical celebration of the birth of Jesus Christ. The birth of Jesus was celebrated by the appearance of a bright star in the sky, which led the three kings and the shepherds to the manger where Christ was born. Christians mark the weeks leading up to the birth of Christ by lighting Advent candles and placing lit candles in their windows, which harken back to colonial times when the Irish Catholic priests were persecuted for practicing their faith. Priests were forced to practice in secret, and a lit candle in the window of a home meant that the priests were welcome there and could find solace within.

Others celebrate Christmas as a cultural celebration with secular traditions such as Santa Claus, holiday lights, mistletoe, and candlelight. Today, families decorate Christmas trees with lights, light candles in the spirit of the season, and hang holiday lights outside their homes. Many towns and cities follow the same tradition of hanging holiday lights. There are many popular destinations for viewing Christmas lights in and around Charlotte, including McAdenville’s Christmas Town USA, The Speedway Christmas, and the Zootastic Christmas Wonderland Of Lights.

Hanukkah (or Chanukah) is the eight-day Jewish celebration that commemorates the rededication of the Second Temple in Jerusalem following the Maccabean Revolt. Participants at the time witnessed what they determined to be a miracle—even though there was only enough oil to keep the menorah candles burning for a single day, the flames continued to burn for eight nights. Hannukah is also known as the Festival Of Lights, with celebrations revolving around lighting the Menorah. Another candle is added to the Menorah after sundown on each of the eight nights. The ninth candle (the shamash or “helper) is used to light all other candles. Blessings are recited, and traditional foods such as latkes (potato pancakes) and jam-filled donuts (sufganiyot) are fried in oil. Additional customs include playing with dreidels and exchanging gifts.

Kwanzaa, a holiday created by Dr. Maulana Karenga in 1966 after the Watts riots in Los Angles, celebrates African “first fruit” harvest celebrations, along with aspects of several different harvest celebrations that together have become the holiday of Kwanzaa. “Kwanzaa” comes from the phrase “mutanda ya kwanza,” which means “first fruits” in Swahili. Each family celebrates Kwanzaa in unique ways, but most celebrations include songs and dances, African drums, storytelling, poetry, and an enormous traditional meal. Families gather on each of the seven nights of Kwanzaa; the children light one of the candles on the Kinara, then one of the seven principles and values of African culture is discussed. The holiday ends with a celebration feast on December 31st called Karamu.

The Light Of The Season

We all celebrate the holidays differently. However, we are joined together by welcoming the light in the darkness. So this holiday season, as you gaze at the Christmas lights, light the Menorah, Advent candles, or the Kinara, be comforted in knowing that we are all celebrating the warmth and glow of the season with love, friends, and family. 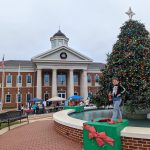