CHARLOTTE – Excitement was “soaring” as Camp SOAR (Special Olympics Athletic Retreat) celebrated its 21st year June 13-17 at the Levine Jewish Community Center in Charlotte.  For the first time since before the pandemic, the camp was able to be in full operation and the enthusiasm was evident all week.  This year nearly 300 campers and 400 volunteers attended the annual event that gives children and adults with intellectual disabilities an opportunity to take part in a full summer camp experience. They participated in sports including swimming, basketball, bowling, tennis, boxing basics, and bocce.  The camp featured a number of other activities such as arts and crafts, bingo, and yoga and wrapped up on Friday with a big dance.

Ben Shea, a student at Charlotte Catholic, was a first-time volunteer.  He was at camp for five days and afterward, he spoke of the varied personalities of the campers he worked with ranging from quiet to “bold” and they had one thing in common:  they all had fun!  The rising sophomore at Charlotte Catholic noted he made many new friends who go to his school and he said Camp SOAR was a great experience.

One of the group leaders, Gayatri Aluri, a student at Vanderbilt and graduate of Ardrey Kell High was inspired by her volunteering at Camp SOAR to major in Special Education and is now focusing on Child Development. From a group leader’s perspective, she adds “the legacy that this group of volunteers has been able to establish is truly exceptional”. And she adds “for young people, I encourage you to step out of your comfort zone and take a chance with unknown experiences”. Over the years, for many high school volunteers, Camp SOAR is their first experience with individuals with intellectual disabilities and for some it’s been the beginning of a journey that has led them into a career in Special Education or an allied field. 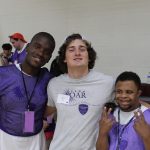