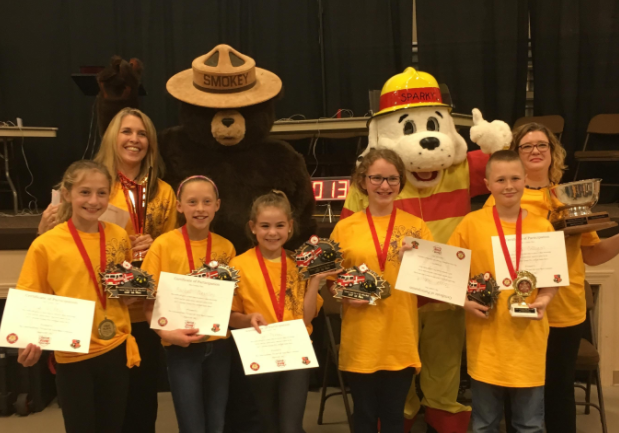 For the fourth consecutive year, Bethel Elementary students won first place in the Cabarrus County Fire and Life Safety Bowl. The competition was held in Concord on March 30.

“This is a huge honor,” said team coach Carrie Whitley. “Each team works very hard and studies the material for months. The material is very important and provides much needed information to students and families.”

Competing on Bethel’s team were fifth grade students Olivia Little, Rachel Pressley, Jack Colligan, Torrie Hedrick and fourth grade student Lili Perrell. The team is coached by April Sloop and Carrie Whitley. As winners of the county competition, Bethel Elementary was awarded money for the school, trophies and the opportunity to compete in the state bowl.

Beverly Hills Elementary Team 1 achieved second place and Shady Brook Elementary from Kannapolis City Schools earned third place in this year’s Cabarrus Fire and Life Safety Bowl. Bethel Elementary’s team, along with the second and third place schools, will advance to the state bowl in Concord on Thursday, April 27. This will be the first time Cabarrus County has hosted the state competition.