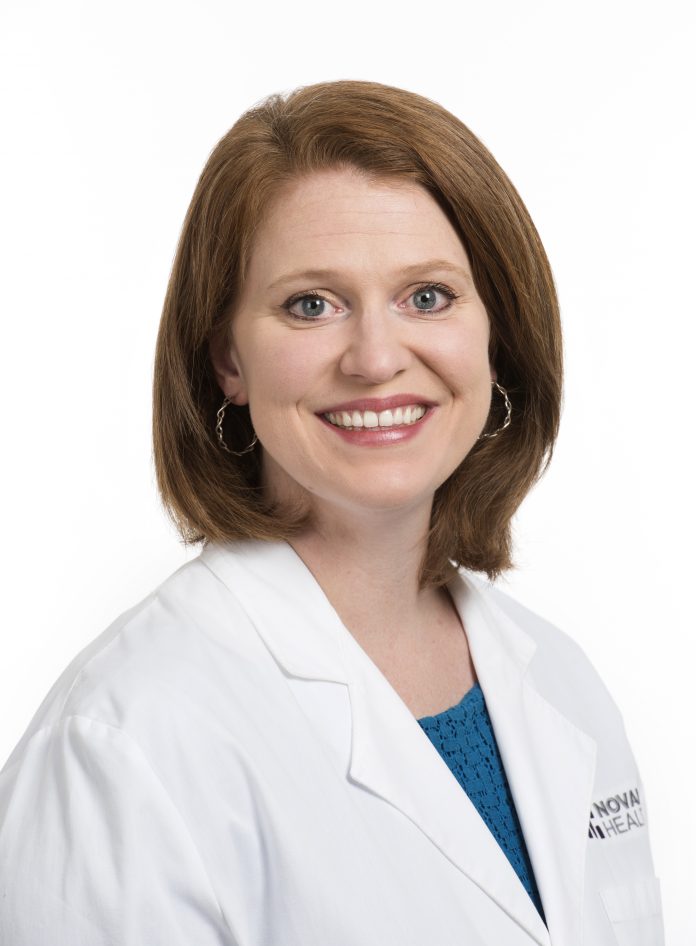 April is World Autism Awareness Month. Novant Health physician Dr. Erica Berger often sees children who are affected by autism in her practice at Novant Health Lakeside Pediatrics in Mint Hill. Dr. Berger is a board-certified pediatrician and has been practicing for 13 years.

“I feel for families when their child is not developing as they think they should. They have a lot of fear when their child is not meeting milestones or losing milestones. It’s incredibly scary,” Dr. Berger says. “But I encourage parents to reach out to their pediatrician instead of searching on the internet and finding things that feed their fear instead of having their child evaluated to see if there truly is a problem or not.”

“We begin specific screening for autism at the 18-month well-child visit,” Dr. Berger explains. For example, one of the questions is whether the child is overly sensitive to loud noises. “The child covering his ears when an ambulance goes by doesn’t mean he has autism, but it’s something we’ll keep an eye on as the child grows.”

Autism is a spectrum disorder, which means that there is a wide range of symptoms and severities a child can exhibit. “Most affected children are showing many of the more common signs between two and three years old,” Dr. Berger says. “Communication red flags are almost the earliest that parents may be aware of and concerned about. Is the child’s language delayed? Does the child play with other children or is the child just playing next to other children? Does the child make eye contact with people?” Both the child’s lack of verbal and nonverbal communication can cause a pediatrician to suspect autism.

Helpguide.org is one resource that lists symptoms that can be present in older children, such as trouble understanding feelings and emotions or difficulty following simple directions. More extreme symptoms like aggression, causing self-injury, and meltdowns may warrant immediate evaluation by a health care provider.

Dr. Berger points out that just because a child has some of the signs and symptoms, conditions other than autism might be responsible. “A language delay may just be that,” Dr. Berger says. “A child might have trouble expressing himself. Or he could have hearing loss or not process language well.  In that case, we recommend hearing tests and speech therapy.”

While no one really knows what causes autism, Dr. Berger says there are some factors that put children at higher risk for the disorder. Children with older parents who are both over 35 years old or who have a sibling with the diagnosis are at increased risk. “What they’re trying to figure out right now is whether there are events that may happen in utero or other environmental factors that trigger a genetic predisposition to autism,” Dr. Berger says.

Dr. Berger assures parents that childhood vaccinations are not to blame. “There is no link between autism and vaccines. Period,” she says. “I understand why parents who have children diagnosed with autism are trying to find a link, but vaccines are not that link.”  Indeed, according to extensive studies by the Centers for Disease Control and Prevention, there is no link between vaccines and autism.

For parents who do find themselves dealing with autism, Dr. Berger recommends the website www.autismspeaks.org as a trustworthy source of information. Also there are many more resources available to parents now than even a few years ago. “Parents can get resources earlier and quicker than before. The earlier an intervention can take place, the better,” Dr. Berger says. “Public knowledge of autism allows for parents to have the background knowledge of worrisome signs and can bring them up, maybe even before the pediatrician points them out.”

Some of those interventions can be in the form of speech therapy for language problems and physical or occupational therapy for those children who have physical delays. Currently, applied behavior analysis therapy is a mainstay for children with autism. This therapy involves helping the child to meet concrete goals that are specific to his symptoms such as helping him to look at his parent and give an appropriate greeting.

There are no medications that treat autism specifically, but, as Dr. Berger points out, some medications can help treat some of the symptoms that can accompany the condition such as attention deficit hyperactivity disorder.

For more information or if you are concerned that your child may have symptoms of autism, contact your pediatrician for help.