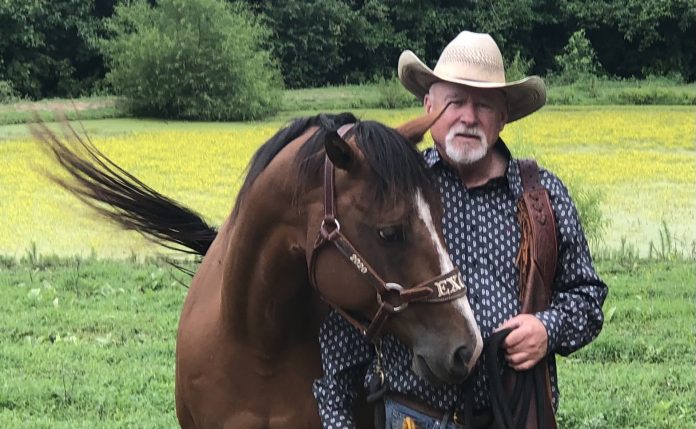 MINT HILL, NC – When I turned off the highway and my tires rolled over gravel and the car’s suspension dropped a little when I hit a rainwater-filled mudhole, I felt home.  The way the road wended and the way the trees grew lusher and leaned into one another.  The way the bustle of the city gave way to the proliferation of vegetation.  The way something inside of you comes alive.  A place that’s unmarred by worldly expectations yet aromatic with wisdom and knowledge of how to ride a horse.

The home of a true cowboy.

I parked and was greeted by two large dogs wagging their tails, trying to tell me to get out of my car.  That’s when I looked up.  Straight ahead.

A man well over six feet tall was walking up toward my car, head down, wearing a cowboy hat.  I got out of the car.  Shook his hand.  Had to take a step back because of his imposing figure.  This was his land.  I told him that I grew up in a place like this.  He said that he liked that.  What a pleasant surprise.  “Let’s take a walk and I’ll show you a few things around here,” he said.

We walked through the horse stables, past patterned and quilted saddle blankets and saddles stacked on top of one another.  This was a place any cowboy could hang his hat.  The air was heady and twin-scented with hay and kicked-up dirt, and I recognized that familiar smell, for it had been part of my own life when I was much younger.

Long-dormant nostalgia hit me, and I half-wondered how the power of memory and smell and sound worked all these years later.  Cicadas careened from the trees.  Unseen crickets played their songs behind tiny stands of grass somewhere in the field.  But in a place as real and authentic as Rick’s property, perhaps the intangible weight of it all surpassed understanding.

We exited the stables.

There was a fine mist from the rain the night before, and then there was not.  It was as if we crossed into some pastoral landscape surreal and bucolic and untouched by nature’s heavy-handedness.  Certainly, there couldn’t be any other more tranquil place on earth.  And that’s when I saw Jake and Savvy, his two horses grazing in a pasture bordered by wooden fencing.  Looked about as big as two football fields put together.  Their own little piece of heaven.  They stood there, not but five yards from each other, not paying me any mind at all, and only focused on a rich meal they found there in the grass.

Their muscles quaked and tensed beneath the thin dermis of their skin.  They were clean.  They were made and borne of confidence they carried in the way they stood, regal and noble. They were champions.

Rick led me up to his house where he introduced me to his wife, Jane, and then entered his office.  A grand room full of trophies and ribbons and trinkets that all spoke about the fulfillment of a cowboy’s life.

“I grew up in the far north, near Canada, in western New York,” he said.  “My parents had livestock.  But I was horse-crazed from my earliest memory.”

“Do you watch or read westerns?” I asked.

I didn’t go any further with the question.  Here I was in a real-life western, sitting in a room chockfull of gold-flaked ribbons and hulks of trophies.  No need to talk about pop culture or classic films.  Let’s stick to real life here.  Let’s stick to the authentic.  I’m sitting in front of a true world champion cowboy.

Although Rick has been practicing law for 44 years, he’s raised, owned, and bred horses for 64.  “I’ll probably retire from the law one day,” he said.  “But I’ll die a cowboy.”

But it wasn’t until 2010 when Rick decided to participate in the sport of extreme cowboy racing.  Craig Cameron, the inventor of the sport who is based out of Texas, held a clinic in Monroe, NC.  Upon witnessing this event, Rick’s horizons were broadened, and he found a passion that he says he will be competing in every year for the rest of his life.  From there, he continued going to other clinics, learning more efficient ways of riding a horse.

The competition is meant to demonstrate the skillset a true cowboy horse would have.  “The race itself is about speed with precision and control,” Rick points out.  It’s judged and timed.  Some of the obstacles include boxing up a cow, going through a gate, and crossing a body of water or a 12-inch-wide bridge.

When you get a horse made, it creates a trusting bond between the horse and the rider,” he said.  “The rider can control the horse with very fine movements.  You can direct the horse’s movements with the twitch of your calf muscle.”  That’s how sensitive they are to direction and touch.  That’s how trusting they are.

But getting a horse “made” takes time.  Years, even.  And “there is a magical moment when you realize that it doesn’t matter what you ask of the horse.”  The horse will listen because it trusts the owner.

A typical race has thirteen obstacles and can be held on even or uneven terrain in both indoor and outdoor arenas.  The obstacles themselves can be natural or artificial.  One part of the competition is free-riding at a high speed around the arena, but being able to quickly adapt to performing challenges that are slower and more technical, like the rider taking the horse through a gate and closing it behind them, the horse patiently waiting and anticipating the next move.  Riders may also be tasked to perform a ground tie in, during which the horse remains stationary without literally being tied to something.  Whatever the obstacle is, there is a strong emphasis on the correctness of completing the task.  Other factors of showing versatility include sorting a cow and having your horse walk at a consistent gait and cadence.  The score ranges from 0 to 10.  Each event has two or more judges.

In 2016, Rick Peniston won the World Championship in Extreme Cowboy Racing with a horse named Jake, who is still on the ranch.  Rick has owned Jake since the horse was six months old.  They learned how to be champions together.

It was a highly emotional time for Rick when he won the world championship.  He had won second place both of the two years leading up to 2016.  When they named him the world champion, Rick’s and Jake’s hard work finally paid off.

And he’s coming back for more.

“This year, I won the Reserve National Championship, and second place in the Ride Smart Division for anyone over 55,” said Rick.  In November of this year, Rick will be competing for the World Championship once again.  This time, with Savvy.

For those interested in getting involved in the sport, Rick recommends visiting the EXCA website at extremecowboyassociation.com.  There are 2-3 events in North and South Carolina each year, and everyone is very welcoming.  Although riders are competing, they support one another and are genuinely excited when a fellow rider places in or wins an event.  When Rick goes out to Texas to compete, it is very much a reunion of like-minded friends.

Rick told me to jump on his golf cart, and he took me through smaller, rain-guttered paths.  He showed me a practice area with an obstacle course that I was unaware even existed in the property.  The man knows what he’s doing.  He’s poured his heart and time into the sport and has plenty of medals and awards to show for it.

In his spare time, Rick practices law.  You can find out more about his practice here:  www.pendeason.com, specializing in serious personal injury.

Rick dropped me off at my car when it was all over.  I shook his calloused hand, and he gave me a knowing look: the look of confidence that only comes from a true cowboy under that brim of a hat.

As soon as I hit the road, I wanted to turn back down that gravel drive.  Just so I could learn a little more about the history Rick Peniston is building on that great swath of unspoiled land.