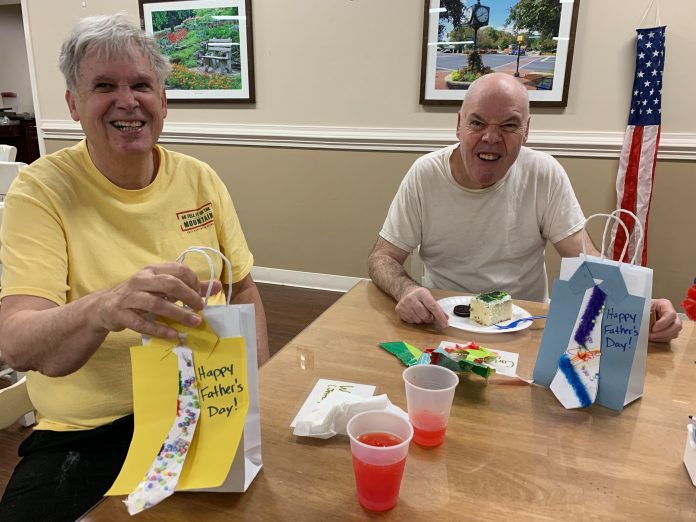 Like many of the programs spearheaded by Bonnie Hovey for Mint Hill Senior Living, “Adopt-a-Dad” started as a simple idea.  Hovey reached out on the Facebook group “What’s Up Mint Hill? The Original Group” to see if there were any children who could make cards for the twenty-five gentleman who reside at Mint Hill Senior Living.  “Our seniors love the children, and it makes them feel special,” wrote Hovey. “Help us remember all fathers on their special day!”

The response Hovey received was overwhelming, and she soon had more than enough cards to give to all the men as well as make decorative garlands for their gathering area.  As Hovey and Angela Prince, moderator of the original “What’s Up Mint Hill?” Facebook group, threw around more ideas, it dawned on them: they’d been framing this as a Father’s Day celebration, but possibly not every gentleman at Mint Hill Senior Living was a father.

“Why don’t we call it “Happy Adopt-a-Dad day instead of Father’s Day?” asked Prince.  “Some of them may have been fathers or may not have been fathers. We don’t know. But we can adopt them all as dads for a day.”

Hovey once again turned to the community of the original “What’s Up Mint Hill?” group to ask for volunteers to visit with Mint Hill Senior Living’s men the week before Father’s Day.  The response was overwhelming. Hovey heard not only from parents who wanted to bring their young children but from adults without fathers in their lives and even a woman who asked if her senior dad could come and join in on the fun.

On Thursday, volunteers from numerous organizations in the community gathered to spend time with their “adopted dads.”  Volunteers included nine adults and nineteen children from Social PALS, a social events and service opportunity meetup group for homeschooled children.  Local moms Danielle Banister and Beth LeGrand were also instrumental in organizing volunteers to bring children. Molly Barczys Brietz’ daycare and MOMS Club of Mint Hill made cards for the men.

In addition to homemade cards, each gentleman received a present purchased by Hovey, practical items the men need and enjoy such as soaps, razors and books.  The adopted dads enjoyed an hour’s company and conversation with volunteers, and everyone enjoyed camo-themed cake provided by Prince and punch supplied by the always-helpful Alisha Sturdivant of Mint Hill Senior Living.  Business Office Manager Audra Jolly, Activity Director Emery Clark and Executive Director Cindy Drye were also instrumental in supporting Hovey and Prince’s activities.

Hovey and Prince work hard to plan events like this year-round for the residents at Mint Hill Senior Living.  “It’s really about connecting them with community and the community appreciating more seniors,” says Prince.  “Not everybody can be out and about. They don’t always have the same exposure. Sometimes bringing it to them brightens their day, makes them feel special.”

Jolly loves that “Adopt-a-Dad” really put the spotlight on the center’s male residents.  “A lot of times the fathers are forgotten,” says Jolly. “They tend to not always come to the parties.  It was awesome to celebrate them.”

The Adopt-a-Dad program has stirred up even more interest for Hovey’s efforts at the Senior Center.  Hovey is already thinking ahead to Christmas, collecting and cleaning gently used stuffed animals to give to seniors during the holiday season.  “What’s great is we have more and more people contacting us,” says Prince.  “Bonnie keeps this momentum going.”