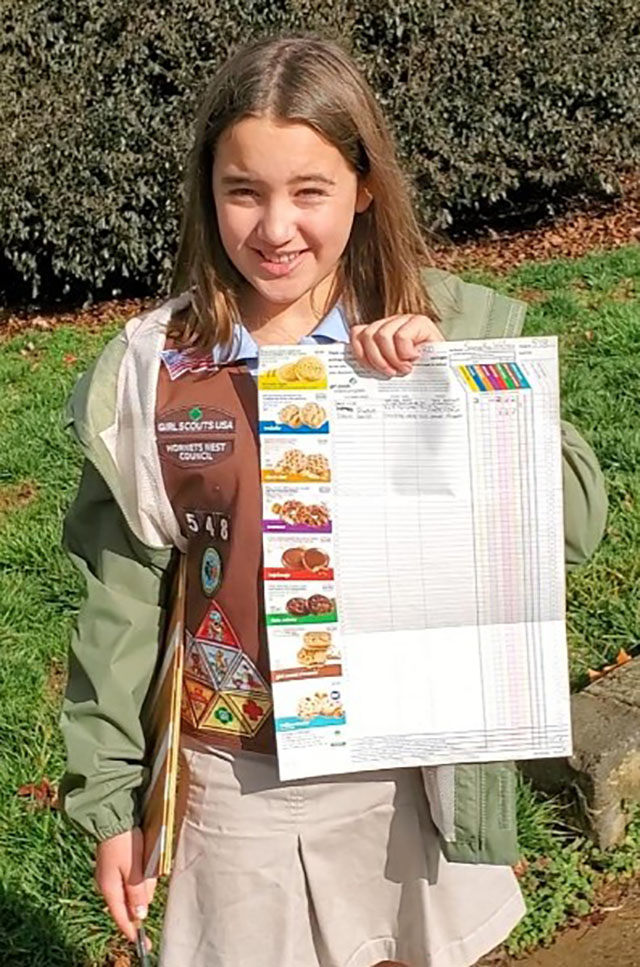 Today, Girl Scout cookies are nothing less than a multi-million dollar empire.  In fact, according to NBC News, revenue from the sales of Girl Scout cookies from 1999 through 2012 alone hovered around $700 million.  So you may be surprised to learn that originally – over a century ago – Girl Scout cookie sales started out as nothing more than a local bake sale.

In 1917, only five years after Juliette Gordon Low started Girl Scouts in the United States, the Mistletoe Troop in Muskogee, OK, baked cookies and sold them in their high school cafeteria as a service project.  Throughout the 1920s, Girl Scouts across the country continued the new tradition, baking simple sugar cookies, which they packaged in wax paper bags, sealed with a sticker and sold door to door for 25 to 35 cents per dozen.

Sales of Girl Scout cookies continued to grow and spread until World War War II, when sugar, butter, and flour shortages forced the Girl Scouts to explore alternative means of fundraising (in 1944, they sold the first Girl Scout calendars).  Post-war, cookie sales expanded in more ways than one. In 1951, you could buy three different varieties of Girl Scout cookies, and the beginning of suburban sprawl found Girl Scouts selling them not just door-to-door but at tables in shopping malls.

It was in the 1970s that Girl Scout cookies began to look a lot more like we know them today.  In 1978, the Girl Scouts reduced the number of commercially licensed bakers from as many as fourteen to just four.  This helped ensure lower prices as well as uniform quality, packaging, and distribution. For the first time, all cookie boxes featured the same designs, pictures of Girl Scouts hiking and canoeing.  In 1979, they added the brand-new Girl Scout logo designed by Saul Bass to the boxes.

Cookie selection varied slightly over the next two decades, but it always included three favorites – Thin Mints, Do-si-dos and Trefoils – three cookies with roots in the “sandwich,” “shortbread,” and “chocolate mint” varieties originally offered when cookie selection first expanded in the 1950s.  By 1998, eight cookies were available, including some low fat and sugar-free varieties.

The twenty-first century brought both the comfort of consistency and the excitement of change to cookie sales.  The three mandatory varieties remained, but they were packaged in new, bright, bold boxes. All Girl Scout cookies were kosher, and for the first time in history, Daisies (the very youngest Girl Scouts) began selling cookies.

Girl Scout cookie sales today look different than they did a century – or even a decade – ago thanks to the launch of the Digital Cookie platform in 2014.  Digital Cookie allows today’s Girl Scouts to reach a wider audience while introducing them to the basics of online marketing, app usage, and e-commerce. New this year in 2020 is “refreshed cookie packaging” with updated images of current Girl Scouts participating in a wide variety of modern scouting activities and, in select markets, “Lemonades” and “Lemon-Ups.”

Today, the Girl Scout Cookie program is the largest girl-led entrepreneurial program in the world.  Though much has changed, the core of the Girl Scout Cookie program remains the same. Cookie sales help Girl Scouts master essential skills like goal setting, decision making, money management, people skills, and business ethics.  And just like when the Mistletoe Troop first sold cookies in their school cafeteria in 1917, 100 percent of the net revenue earned through Girl Scout cookie sales stays with the local council and troops to fund essential programming, reach underserved areas, maintain camps and properties, and fund community projects.

If you don’t know a Girl Scout personally, download the free “Digital Cookie” mobile app and click “Find cookies now!” to find the cookie both closest to you.  And if the mere thought of all those cookies is threatening to topple your New Year’s resolution to eat better, never fear. Through “Troop2Troops,” you can purchase cookies that will be sent to veterans’ hospitals and military lounges.