A total of 147 vehicles participated in the show: 139 car entries and 8 motorcycles.  “It was more than years past for sure,” says Matthews Chamber of Commerce Executive Director Jessica Tullar.  “I think people were really excited to have something to do in person and experience an event that was socially distanced. Guests were really cognizant of not getting too close to one another, and people who wanted to wear masks could. This event really lent itself to a variety of comfort levels. Plus, seeing so many different cars is fun for all ages!”

Unionville resident and Matthews Auto Reunion newcomer Amara Dandrow was thrilled to be selected as “Best Import.”  Her 2016 Hyundai Volester Turbo.  For Dandrow, building and showing cars is a family affair.  Her husband and son did the car’s air ride suspension, which allows the car to sit on the ground and “air up” off the ground in order to drive it.  Her son Kaleb, who works for Atlantic Wraps in Indian Trail, wrapped the vehicle in the iridescent Rushing Riptide.  Dandrow’s Hyundai has been modified with both interior and engine bay carbon fiber accents and has color-changing lights in the grill engine bay, interior and under the car.

A newcomer to the Matthews Auto Reunion, Dandrow entered at the last minute when her husband spotted the sign for it.  “To be honest we really was expecting it to be just for older classic cars and didn’t expect to win,” says Dandrow.  “We just thought it would be something fun to do, so I was genuinely surprised when my name was called.  I was happy that I got to spend the day with my sons doing something we all enjoy.”  Dandrow’s son Kaleb also brought home the trophy for “Best Import Motorcycle” in his first show with his bike.

Charlotte native Mike Cranford brought home the “Best in Show” trophy for his 1962 Chevrolet Biscayne.  “It is quite a rare car as it is equipped with the factory 409 engine with two 4-barrel carbs and has 409 Horsepower with a  Muncie 4-speed transmission,” says Cranford.  “This car was special0ordered new back in 1962 to go drag racing.  It is Roman Red with Red Interior.  It is a radio and heater delete ordered car with no power steering or power brakes. The car was ordered with the highest horsepower option available for 1962.  This car has had a complete body off frame restoration to look just as it did back when new.”

An avid car collector for over 35 years, Cranford has been attending the Matthews Auto Show for over 20.  “I love muscle cars, sports cars, exotics – basically, just love cars and most importantly the wonderful people I meet at the events I attend around the country,” he says.  “Some of my best friends today have come from meeting them over my many years in the hobby.  I was totally surprised to win Best of Show as there were so many beautiful cars participating,” he continues.  “It was quite an honor for my car to be chosen and the beautiful trophy will be displayed in a special place that I can view and enjoy.”

In his third year in the show, AJ Schlub from Mint Hill took home the title of “Best Corvette” with his 2014 Corvette C7 Z51.  Schlub’s Corvette may be modified with custom wheels and tires, a Supercharger, Exhaust System, Methanol Injection, engine work, and custom painted accents, but to three-year-old son Jackson, it’s just the RED CAR.  “I was able to take my son Jackson this year for the first time,” says Schlub, who builds cars at his shop, The Wheel and Tire Exchange.  “He had a blast at the show and helped clean the car.  It was great to spend time with him and see his excitement about the cars.”

“There were many beautiful cars there, so when we won Best Corvette, I was humbled,” says Schlub.  “Jackson received the trophy.  He did not let it go for the rest of the day, and now it sits on his dresser.  It’s a great event the Matthews Chamber of Commerce hosts, and we plan on going back for many years.”

“We are so pleased with the success of this year’s Matthews Chamber 30th Annual Auto Reunion & Motorcycle Show presented by Atrium Health,” says Tullar.  “We saw over 140 registrations, and around 2,000 people in attendance! We couldn’t have asked for more beautiful weather, and crowds who let people enjoy the show safely. After a year-long hiatus due to the COVID-19 pandemic, it felt great to be out in the community again with one of our signature events and showing off our beloved town of Matthews.”

Check out more great events coming up in the town of Matthews on the Chamber’s website: www.matthewschamber.org. 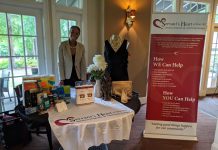