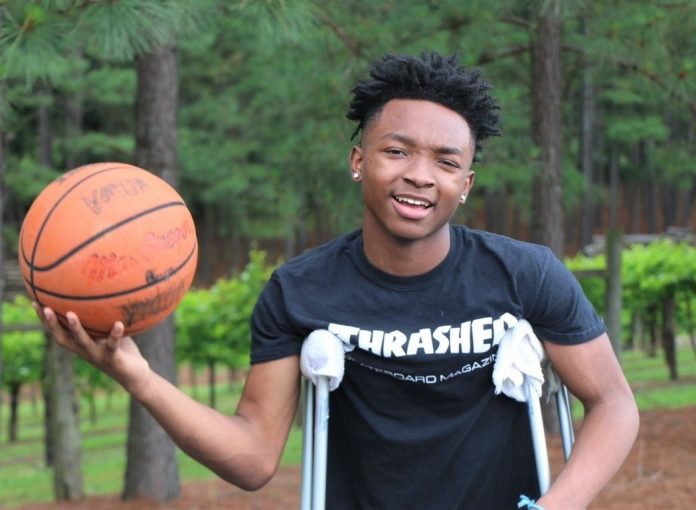 He’s 15, talented and already drawing attention from college recruiters. But Za’Haree’s career came to an abrupt halt when a serious leg injury sidelined the energetic point guard for nearly a year.

“I thought `What am I going to do?’ Za’Haree said. “I was heartbroken. It was very sad.”

He faced an arduous recovery and questions about competing at a high level on the court. But Novant Health surgeons and trainers helped Za’Haree return to his passion.

A mother’s eyes often can tell

Angela Holland knew something was off as she watched her son play basketball.

“Za’Haree was playing with a little limp that I’d see after he played a long period of time,” she said. “I could see it especially if he sat out then came back into the game.”

Za’Haree played year-round until May 2018, when his left knee swelled and the pain intensified during a tournament in Myrtle Beach, South Carolina. An X-ray a few days later shocked the family.

“The nurse told us to get him off his leg right now,” Holland said. “He needed to have surgery.”

Za’Haree’s femur (thighbone) – the longest and strongest bone in your body – wasn’t receiving adequate blood flow. That can cause bone and cartilage to break loose, causing pain and hindering joint motion. In Maddox’s case, a large fragment of bone had broken away and was barely hanging on.

Osteochondritis dissecans occurs most often in children and teens. It can be caused by overuse and high-impact activities, such as jumping and running, which affect the joint. The condition occurs most commonly in the knee, but also in elbows, ankles and other joints.

“All of us in sports medicine see this condition,” Haigler said. “But (Za’Haree’s) was probably the worst case I’ve seen.”

Haigler had cadaver bone and cartilage standing by, but didn’t need to use them for Za’Haree’s repair. Osteochondritis dissecans is rare, estimated to occur in the knee in 15 to 29 per 100,000 individuals, according to the National Institutes of Health. 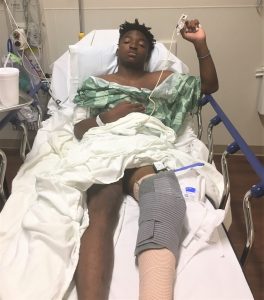 It can be caused by a traumatic incident or repetitive use of the joint, and is most often seen in athletes. Za’Haree didn’t have a single accident that caused it, but said his knee “had been hurting” for about six months prior, and slowly worsened.

“I felt devastated for him because I knew basketball was his love,” Holland said. “He’s determined. He never wants to be taken out of a game. I knew he’d get back, we just didn’t know how long. After he was cleared, it was `Mama, can you take me to the Y or the park?’ over and over.”

“I’m extremely proud of him. He didn’t let it get him down.”

On every trip to physical therapy, Za’Haree had the same question for Novant Health athletic trainer Rebecca Shomo – “When can I play ball again?” 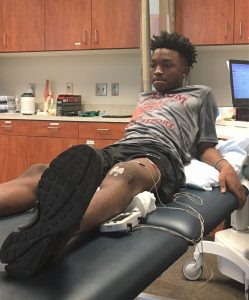 “I have to thank all the Novant Health doctors and therapists for their patience and expertise,” he said. “It was such a relief to get back. Wonderful. I was so happy.”

Back in the lineup

Being young helped Za’Haree recover, compared to someone 15-20 years older, for instance. Haigler said the plan during rehabilitation was to let Za’Haree progress based on what he could tolerate.

“He’s done a lot better than I thought he would, given the extent of his injury,” Haigler said. “If this allows him to play a sport in college, that’s a home run.”

This school year, instead of cheering on teammates from the sidelines, Za’Haree will be in the middle of the action. What advice would Za’Haree give to a young athlete in his situation?

“Listen to your doctor,” he said. “Stay motivated and jump over every obstacle.”