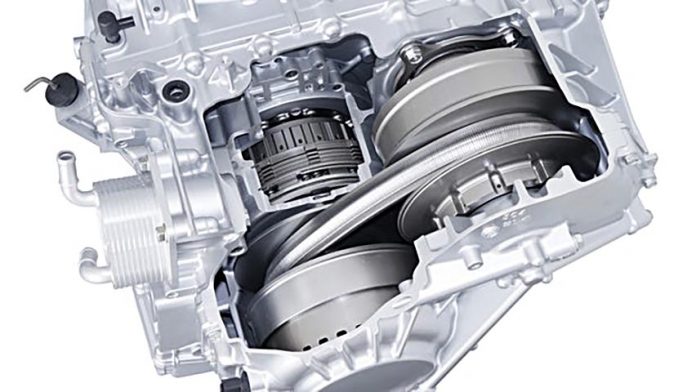 The newest toy of the automotive world is the continuously variable transmission, or CVT. A CVT is an automatic transmission that, instead of having a fixed number of gears, uses two pulleys, usually cone shaped, that can adjust their own width. One pulley is attached to the engine, and the other sends that power to the driving wheels. By using adjustable pulleys instead of gears, the transmission never has to shift, and by doing so the vehicle doesn’t lose power and time, like vehicles that have to shift do.

CVTs have been a bit controversial since they began making appearances on the highways this decade. Since the technology is still fairly new for street cars, reliability isn’t yet a guarantee. For others, the feeling of a vehicle that doesn’t shift feels uncomfortable and confusing. RPM’s can get very high with a CVT don’t usually drop until you’ve leveled out your speed.

Despite all this, it is very likely your next vehicle will feature a CVT. According to Car and Driver, only about 40 different kinds of new cars sold this year have manual transmission options. With the manual all but dead, automakers are constantly searching for how to make their automatic transmissions more efficient and productive, and for now, they think the CVT is the answer.

CVTs may be new to street legal cars, but they aren’t new technology. Many bikes use these transmissions, especially Hondas and Vespas. These transmissions were even seen in Formula One test sessions as early as 1993.