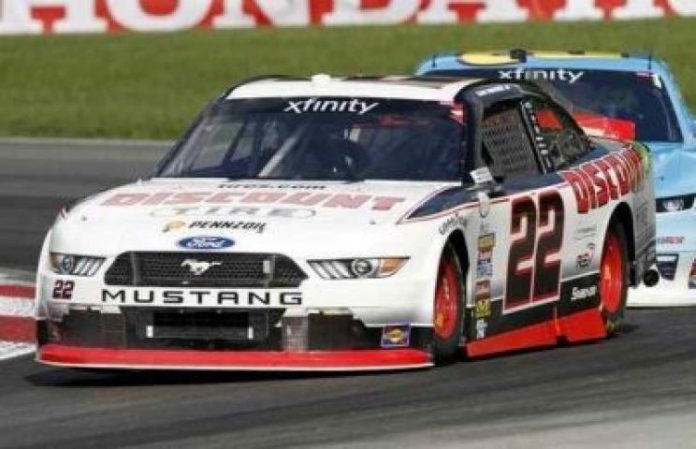 Sam Hornish Jr. survived and won a rough race rolling from pole to the checkered flag for a big victory to win NASCAR’s Mid-Ohio Challenge on Saturday.  This was his first XFINITY victory in more than a year for the Defiance, Ohio native.

Hornish who made only his third start of the season in the Team Penske No. 22, led a for a race high 61 laps of the 75 on the 2.258 mile track giving him his fifth career victory.

The only real challenge Hornish faced most of the day was from the restarts on nine yellow caution flags, plus two red flags when he had to sit on the track cooling down for 24 minutes.

When Hornish fell back a car or two length, he was able to bounce back within a lap or two to regain his impressive lead.  The two drivers who gave Hornish the most competition was Daniel Hemric and Matt Tift.

Hemric led three times for eight laps and was able to beat Tift to the finish line for his career best in second place in the No. 21 Chevrolet.  He finished only 1.335 seconds behind Hornish when he received the checkered flag.

Tift who finished third also had an outstanding race and was impressive.  He fell from seventh place to 37th with the plenty of laps remaining.  However, he was able to bob, weave and work his way through the field to third for a good days work in the No. 19 Toyota.

Rounding off the top ten includes JD Davidson in the No. 20 Toyota in fourth, in fifth Andy Lally in the No. 07 Chevy, sixth Series points leader Elliott Sadler in the No. 1 Chevy, followed by Brendan Gaughan, Brennan Poole, Justin Marks and Dakota Armstrong.

Other top drivers who had a difficult day include Ryan Reed who recently turned 24 on Saturday, experienced his second crash and was done for the day on lap 57.  Reed sustained a hard hit from Justin Mark’s in the No. 42 Chevy that ended his race.  He finished 33rd which will probably impact his current position in the top 10 standings.

The NASCAR XFINITY Series will move on to Bristol Motor Speedway on Friday night August 19th starting at 7:30 PM eastern.  All the action can be followed on NBCSN, PRN and Sirius XM.