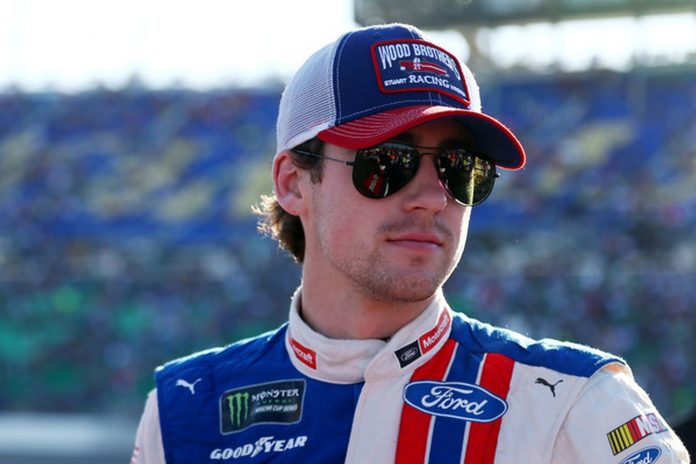 Ryan Blaney the 23 year old potential superstar driver put Wood Brothers Racing back into the winners circle with a veteran type of performance in the last lap of Sunday’s Monster Energy NASCAR Cup Series car race at Pocono Raceway.  The win is the 99th career victory for the historic Wood Brothers organization in NASCAR competition.

Blaney was trailing the leader Kyle Busch with 10 laps remaining in the event.  Blaney consistently maintained control of his race car as Busch forcefully continued to block his path to pass his No. 18 Toyota.   However, eventually Blaney would overtake Busch on Lap 151 and hold off Kevin Harvick in the final lap to achieve the victory by an extended car length.

Harvick and Blaney competed aggressively and professionally over the final laps with Harvick on the winners tale trying to pass at every opportunity.  However, Blaney was able to hang on and hold off Harvick’s surge to cross the finish line first passing the checkered flag ahead of the second place finisher by a slim margin of victory.

Meanwhile, Jimmie Johnson, Dale Earnhardt Jr., and Jamie McMurray all experienced major car incidents in Stage 2 and had to exit the race during the early going.  Jimmie Johnson took a hard hit in the rear of his No. 48 race car with the wall on Lap 95 after losing his brakes.  While Jamie McMurray hit an object or his brakes failed on the track which caused  brake fluid to catch on fire ending his day of racing bringing out the red flag.  Both drivers were not seriously injured in their separate accidents racing at 200 MPH which is good news to report.

With Blaney the race winner in his No. 21 Ford, Kevin Harvick finishing a close second place in the No. 4 Ford, Erik Jones placed third in the No. 77 Toyota, Kurt Busch fourth in the No. 41 Ford, and XFINITY winner Brad Keselowski fifth in his No. 2 Ford rounding off the top five drivers.

The victory will move Blaney up a few positions in the 2017 standings as he was ranked in  13th place prior to the Pocono race with 320 points.  The points leader prior to the race is Martin Truex Jr., with 545 points who finished sixth and will maintain the top spot.  While Kyle Larson finished seventh had 536 points and will remain behind Truex.  The  second place finisher Harvick will continue to hold the third spot where he started the day with 429 points receiving additional points with his solid effort.

The Monster Energy Series will travel to Michigan International Speedway next Sunday June 18th for the fathers day race starting at 3:00 pm.  This event will mark the 15th of 36 races scheduled for 2017.  Race fans can follow all the action on FS1 and MRN radio.