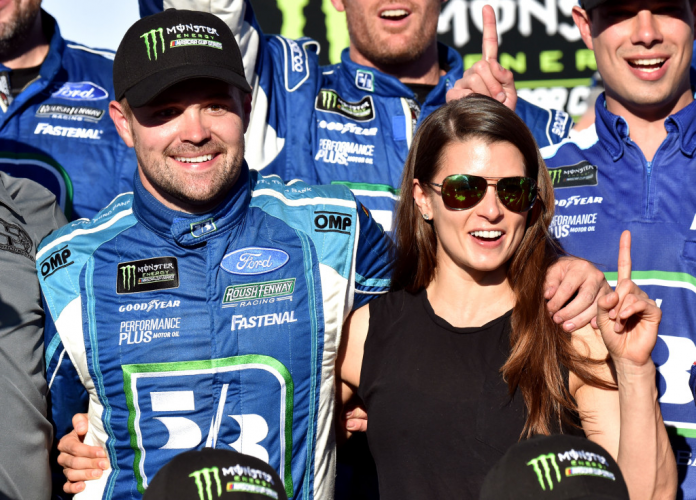 Ricky Stenhouse Jr. started Talladega from the pole position.  He avoided a major wreck and several other minor encounters while proceeding to capture his first career Monster Energy Series win in the GEICO 500 on Sunday in Alabama.  Stenhouse Jr. became the tracks eleventh driver in the history of the race to win their first NASCAR Cup race at Talladega Superspeedway.  The 29-year old driver won for the first time in 158 previous starts.

The No. 17 Rouse Fenway Racing Ford the fastest car on the track passed Kyle Busch in overtime to capture the victory in exciting fashion.  While Jamie McMurray finished second by a fender in his No. 1 Chip Ganassi Racing Chevrolet just ahead of Kyle Busch who ended up in third in his No.18 Joe Gibbs Racing Toyota.  Rounding out the top five Aric Almirola in race car No. 43 Richard Petty Motorsports finished fourth, and Kasey Kahne in the No. 5 Hendrick Motorsports Chevrolet finished in fifth place.

In Lap 168 of the 191 lap overtime race A.J. Allmendinger spun around Chase Elliott’s No. 24 Chevrolet from a bump behind as the two were battling for second place.  Elliott’s car turned on its side while Almendinger’s No. 47 Chevrolet went airborne and flipped upside down.  Both drivers avoided serious injury as they walked away from their racing vehicles.  Allmendinger was checked out, treated and released from the infield medical care center.

A total of 18 racing vehicles were involved in the wreck including some of the better known drivers including Brad Keselowski, Joey Logano, Kevin Harvick, Martin Truex, Jr. Matt Kenseth, and Danica Patrick.  This wild race featured 14 different leaders and nine caution flags.

The Monster Energy Series moves next to Kansas Motor Speedway for the Go Bowling 400 on Saturday May 13th under the lights.  The race will start at 7:30 pm eastern and can be followed by race fans on FS1, MRN, Sirius XM NASCAR Radio.