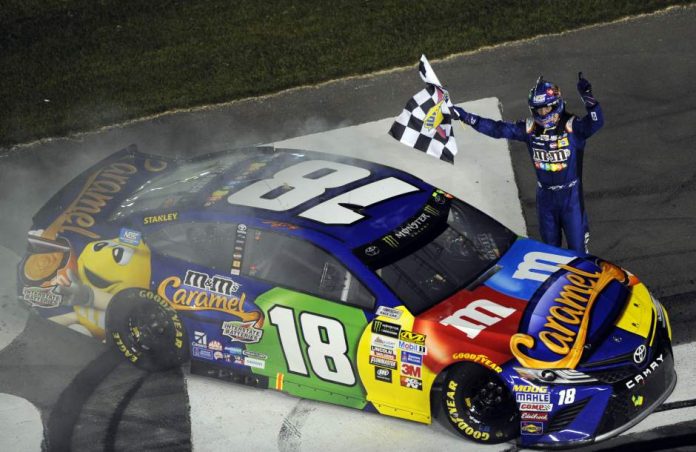 On Friday night at Bristol Motor Speedway Kyle Busch in the Joe Gibbs Racing No. 18 Toyota led the field 186 of 300 laps in the Food City 300.

This win was Busch’s fifth XFINITY win of the season and his ninth at Bristol.  He now has collected 91 career wins and has stated he will retire when he has achieved 100 victories in his amazing career.

The only setback during the race for Busch was his penalty for speeding in pit-road during the intermission after his Stage 1 victory.  The mishap forced him to restart in 19th place, however, he catapulted back to the front of the field in 58 laps to win Stage 2 to position himself for another victory at Bristol.

This win actually gives Busch two consecutive wins as he had a come from behind victory on Wednesday in the NASCAR Camping World Truck Series race.  He is now well positioned to pull off a hat trick in the Monster Energy NASCAR Cup Series race on Saturday night with another win in the main event.

It’s obvious Busch has mastered this track.  He beat his teammate Daniel Suarez in the No. 20 Toyota by 1.181 seconds when crossing the finish line passing the checkered flag.  So this was a good day for the Joe Gibbs Racing team finishing in the top two spots.

Meanwhile, the series point leader Elliott Sadler finished third in the No. 1 Chevrolet, Ty Dillon in the No. 3 Chevy was fourth and Justin Allgaier in the No. 7 Chevy fifth.  The remaining  top 10 finishers were Brennan Poole sixth, Daniel Hemric, Austin Dillon, Joey Logano and Cole Custer.

A point of interest is Dale Earnhardt Jr. finished 13th, one lap down and was dehydrated after the race and required fluids.  Also, Ryan Reed who is barely holding on to eight place in the standings with 458 points experienced his third accident in as many weeks finishing in 37th place.  Reed needs a good performance next week to stay in the top 10.

The series will move on next week to Road America for the Johnsonville 180 on Sunday August 27th at 3:00 PM eastern.  All the live action can be followed on NBCSN, MRN and Streaming on NBC Sports.