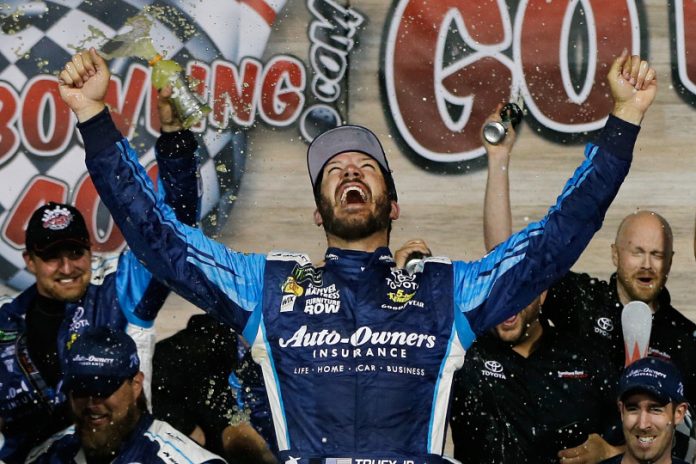 Martin Truex Jr finally conquers Kansas Speedway with his first career victory on this race track.  Truex streaked past the pack after the final restart with two laps remaining in Saturday night’s Go Bowling 400 to bring home the victory for the Furniture Row Racing Team.

The Jersey Boy led a race high 104 of 267 laps to win for the ninth time in his career and his second Monster Energy Cup Series race this season.  He had led at Kansas three times previously leading with the most laps without winning the race in Kansas.  However, in this particular race he had the speed and the power and would not be denied.

In the final restart Truex jumped out in front of Ryan Blaney and never looked back.  Meanwhile, Brad Keselowski in his No. 2 Team Penske car rallied from two laps behind to finish in second place, followed by Kevin Harvick in the No. 4 Stewart-Haas Racing car, Ryan Blaney dropped back to finish in fourth in his No. 21 car, and Kyle Busch in his No. 18 rounded off the top five.

When Joey Logano and Danica Patrick were racing through Turns 1 and 2 battling for 12th position, Logano’s No. 22 Ford suddenly pulled to the left turning Patrick’s No. 10 Ford hard into the outside wall erupting her car into flames.  Then Aric Almirola’s No. 43 Ford slammed into the wreck at full speed causing a major accident, and the race was red flagged for almost 28 minutes to clean up the track.  Amirola was badly shaken as the rescue and safety crew cut the roof off his car and extricated the driver from the race vehicle.  He was airlifted to the University of Kansas Medical Center for more observation and a possible neck injury.

The Stage 1 winner was Kyle Busch who captured his second stage win of the season.  He led 18 of the first 80 laps in his No. 18 Joe Gibbs Racing Toyota.  Truex finished second in his Furniture Row Racing No. 78 who led for 43 laps.

In Stage 2 Ryan Blaney was the winner in his Wood Brothers Racing No. 10 car as he led for the final 18 laps of the 80 lap stage.  Kyle Larson finished second in the stage to gain valuable points.

The next race is the Monster Energy NASCAR All-Star Race on Saturday May 20th at 8:00 pm at Charlotte Motor Speedway.  All the action can be seen on FS1, and MRN Radio.  The following week is the Coca-Cola 600 on Sunday May 28th at 6:00 pm on Fox Television, and PRN Radio.