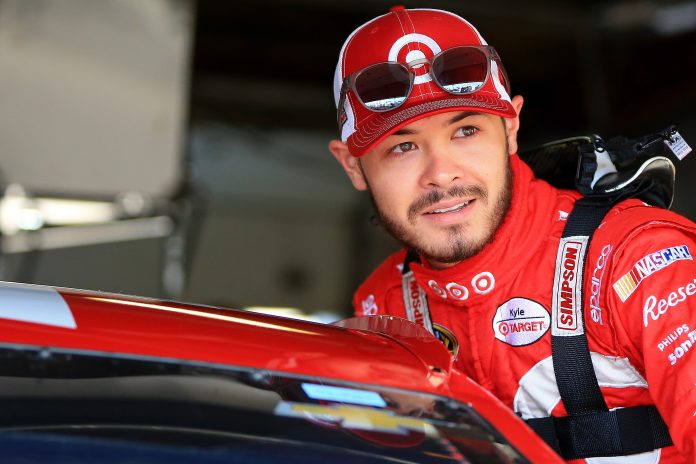 Kyle Larson the pole setter pulled off another big victory this past Saturday at Dover International Speedway.  The One Main Financial 200 was really a two driver race between Larson and Ryan Blaney.  This race was the 11th NASCAR XFINITY Series race this season on the circuit.  Larson won for the third time in six starts this year in XFINITY competition and led 137 of the 200 laps to Blaney’s 28.

This win was the first time for Larson at Dover, the victory was his eight XFINITY win of his career.  He finished 1.173 seconds ahead of second place finisher Ryan Blaney. The third place spot went to Daniel Suarez who crossed the checkered flag 14.078 seconds behind the winner in his No. 18 Toyota.

Cole Custer in the No.00 Ford ran fourth, while Ryan Reed the Daytona winner in the Roush Fenway Racing No. 16 rounded off the top five.  However, William Byron the 19-year old Sunoco Rookie of the Year candidate finished sixth and collected a $100,000 bonus check as the highest finishing series regular among four drivers who were eligible for the prize in the last of four “Dash 4 Cash” events this 2017 season.

The day truly belonged to Larson who led the first 63 laps to overcome Blaney in the first stage.  The second stage was won by Darrell Wallace Jr., who would pick-up more important stage points for his effort.

The key moment in the race for Blaney came when he lost ground in a near wreck with Wallace that moved him back several positions.  He tried to close in on Larson after a restart on lap 141, however, the No. 90 race car driven by Brandon Brown got loose on the inside bottom that probably cost Blaney the race as he could never fully recover after nearly wrecking.  It allowed Larson to maneuver past Blaney and he just powered his No. 42 Chevrolet to the victory.  Even though there was another restart it was to late to recover and catch the leader.

Meanwhile, Elliott Sadler finished seventh which allows him to stretch his lead on top of the XFINITY Series standings.  He currently leads JRM teammate Justin Allgaier, who was the 11th place finisher on Saturday by 12 points.

The XFINITY Series will move to Pocono Raceway on Saturday June 10th with the race starting at 1:00 pm eastern.  Fans can follow all the racing action on FOX and MRN radio.